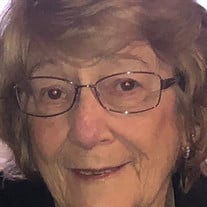 Yvonne “Maggie” Hite, age 86, of Buckhannon, the Liggett Addition Community, died Monday, September 30, 2019, at her home. She was born April 28, 1933, in Webster County a daughter of the late Commodore Huffman and Nora Eudy Waggoner. Maggie was united in marriage on March 29, 1952, to Otha H. “Jiggs” Hite who preceded her in death on March 11, 2018. In addition to her husband she was also preceded in death by one daughter Robin Davis, one grandson Brian Elliott and two brothers Frank and Jack Waggoner. She is survived by one daughter Charmaine Hite and husband Stanley Rexroad of Buckhannon; two grandchildren: Erin Lester and husband Geoff of Los Angeles, CA, Brandon Duke of Wilson, NC ; one great granddaughter Brianna Elliott and three great grandsons: Hayes and Mason Lester and Joseph Elliott; several nieces and nephews also survive; special friends: Jim and Cathy Vance, Lucy Cutright, Carolyn Tenney, Bob and Sammie Allman, Bob and Betty Heavner, Cathy Poundstone, Pastor Jay Teodora and countless others too numerous to mention. Maggie was a former clerk at the Fort Pitt and Madison Shoe Store on Main Street in Buckhannon for many years and she was also employed as a cook for the Upshur County Schools. She enjoyed traveling with her husband and spending time with family and friends. Maggie was a member of the West Buckhannon United Methodist Church. A special thanks to all of the caregivers and WV Hospice for their wonderful care. Friends will be received at the Heavner and Cutright Funeral Chapel on Tuesday, October 8, 2019, from 9:30-10:00 AM the funeral hour with Chaplain Jennifer Suehs-Vassel and Pastor Jay Teodoro officiating. Private interment will be held in the Lorentz Cemetery. In lieu of flowers, donations may be made to the First Baptist Church, 42 Hart Ave., Buckhannon, WV 26201. The Hite family has entrusted the Heavner and Cutright Funeral Chapel with funeral arrangements.

The family of Yvonne "Maggie" Hite created this Life Tributes page to make it easy to share your memories.

Send flowers to the Hite family.