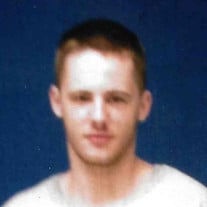 William “Will” Trent Richardson, II, age 25, of French Creek, WV, went to be with the Lord on February 27, 2017, in Alexandria, Louisiana. He was born on October 29, 1991, in Petersburg, WV, a son of Bill and Darlene Hinchman Richardson, who survive in French Creek. Also surviving are one son, Jacob Allen Richardson of Volga and Jacob’s mother, Miranda Brooke Siler, who was the closest and most important friend to Will; five sisters: Heather and husband Jason Mays of Appalachia, VA, Kim Richardson and fiancé Brendan Huff of Arlington, VA; Cassidy Richardson and fiancé Evan Elbon of French Creek; and Brogan and Rylie Richardson, both of French Creek; two brothers: David and Brady Richardson of French Creek; paternal grandmother Carolyn Richardson of Weston; one niece Desi Mays of Appalachia and a niece, Lennon Elizabeth Elbon, due in early April; and countless aunts, uncles, cousins, and friends. He was preceded in death by paternal grandfather Gene Richardson; maternal grandparents Wilford “Cotton” and Marie Hinchman; and his beloved brother Jacob Dylan Richardson. Will was an avid hunter and enjoyed trapping and fishing as well, but the love and passion he had for his family was deeper still. Will’s strong sense of humor and witty spirit will be carried on by his son Jacob. The family will receive friends on Friday, March 10, 2017, from 4-8:00 PM, at the Heavner and Cutright Funeral Chapel. The funeral will be held on Saturday, March 11, 2017, at 10:00 AM, at the funeral chapel, with the Rev. Robert F. Heavner officiating. Interment will follow in the French Creek Memorial Gardens.

The family of William "Will" Trent Richardson II created this Life Tributes page to make it easy to share your memories.

Send flowers to the Richardson family.