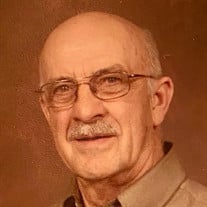 William (Bill) J. Stankus, a resident of Tennerton, West Virginia passed away peacefully at home on Monday, December 6, 2021. He was born September 6, 1932, in Thomas, West Virginia, the son of the late Anthony and Edith Newmeyer Stankus. He was married to Jeraldine VansCoy Stankus, who survives in Tennerton. They would have celebrated their 66th wedding anniversary on December 30th. Surviving are three sons. John and wife Theresa, their son Jonathan and greatgrandchildren Josie and Langston, son Joe and wife Mary Ann, their daughters Dr. Danielle and husband Michael Ware and Ann Marie, and son Steven, and wife Dr. Sara Lewis-Stankus, and their children, Hannah, Leah, and Isaac. He is survived by one sister, Alice Marie McGee of Lansdale, Pennsylvania. Preceding him in death were four brothers, Pete, Jack, Lawrence and Anthony, Jr. Stankus and three sisters, Mary Williams, Pauline Zirkle and Susan Rinehart. Bill was a retired coal miner with forty-three years of underground mining experience. His experience ranged from handloading in 30-inch coal at the Cassity Mine to Assistant Superintendent with Bethlehem Mines 108. He was a proud military veteran who served with the 187th Airborne including tours in Korea. He also served with the Elkins Army National Guard for 26 years, achieving the rank of 1st Sgt. He was an active member of the Holy Rosary Catholic Church and was proud to serve with his fellow members in the Tennerton Lions Club and the Elkins American Legion. He enjoyed turkey-deer hunting and frog gigging with his friends and family. He spent his life serving others and willingly gave his time in helping them with their building and mechanical needs. His ability to diagnose and fix issues amazed all who knew him. His wishes were to be cremated with no burial services. A memorial service and celebration of his life will be held at the Buckhannon Holy Rosary Catholic Church on Saturday, December 11, 2021, from 11 am – 1 pm.

William (Bill) J. Stankus, a resident of Tennerton, West Virginia passed away peacefully at home on Monday, December 6, 2021. He was born September 6, 1932, in Thomas, West Virginia, the son of the late Anthony and Edith Newmeyer Stankus. He... View Obituary & Service Information

The family of William J. "Bill" Stankus created this Life Tributes page to make it easy to share your memories.

Send flowers to the Stankus family.