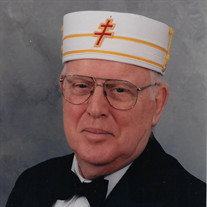 William Eugene Harris, 33°, age 94, passed away Monday, March 11, 2019, at St. Joseph’s Hospital in Buckhannon. He was born May 10, 1924, at West Milford, WV, a son of the late Dr. Thomas G. and Dora Bailey Harris. He was the youngest and last surviving of nine children. He was united in marriage to Jean Lea Waugh Harris in 1951, and she preceded him in death on July 23, 2007. Surviving are one son James L. Harris and wife Barbara Stemple Harris of Belpre, OH and two grandsons: Jonathan and Patrick. Mr. Harris was educated in Harrison County Schools. After graduating from Unidis High School, he served in WWII as a Pharmacist’s Mate for three years. He graduated from WVU in 1949, where he was a member of Kappa Sigma. He was then a representative for Metropolitan Life and Prudential, and became a Chartered Life Underwriter (CLU). He was past president of the Parkersburg Life Underwriters and a Life Underwriters Training Council Instructor. He was a member of the Herman Lodge #6 A.F. & A.M. of Clarksburg, Scottish Rite Bodies, York Rite, Nemesis Shrine Temple, and President of the Ohio Valley Shrine Club of Parkersburg. He was devoted to helping with the Shriners Children Program and the Scottish Rite Learning Disorder Clinics of Charleston and Morgantown. He also served as a “roadrunner”, transporting children to and from Shriner’s Hospitals. He was also a member of the Upshur County Shrine Club and the American Legion Post #7 of Buckhannon. He was a member of the First Presbyterian Church of Parkersburg and served there as Deacon, Trustee, and Elder. Later, he attended the First Presbyterian Church of Buckhannon, where he served as Liturgist and Treasurer of the church’s service group. He was also a member of the John W. Reger Society of West Virginia Wesleyan College. He enjoyed most nonfiction reading, especially history. He loved hunting and fishing with his son and grandsons, woodworking, golfing, WVU football, music, and travel. He was devoted to his family and took tremendous pleasure in all their activities. The family will receive friends at the Heavner and Cutright Funeral Chapel on Saturday, March 16, 2019, from 1-2:00 PM, the funeral hour, with the Rev. Robert F. Heavner officiating. Interment will follow in the Heavner Cemetery. In lieu of flowers, donations may be made to the Shriners Hospitals for Children, 2900 N. Rocky Point Dr. Tampa, FL 33607 or the Scottish Rite Clinic for Childhood Language Disorders, 24 West Second Street, Duluth, MN 55802.

The family of William Eugene Harris created this Life Tributes page to make it easy to share your memories.

Send flowers to the Harris family.