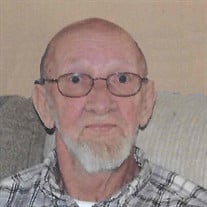 William Junior Dean, age 81, of Hawkins Drive, Buckhannon, died Thursday, March 9, 2017, at the United Hospital Center in Bridgeport. He was born on December 6, 1935, in Upshur County, a son of the late Aaron Bencil and Lillian Virginia Mouser Dean. On February 28, 1959, he was united in marriage to Carol Jo Hollen Dean, who preceded him in death on October 23, 2014. In addition to his parents and wife, he was also preceded in death by one infant daughter Deborah J. Dean and one son-in-law Michael Eichelberger. He is survived by three daughters: Tonya Perkins and companion Jim Lawrence of Ellamore, Tamela Eichelberger of Elkins, and Tina and husband Ray Smith of Clarksburg; six grandchildren: Hayes Perkins of Davis, WV, Kati and husband Jared Boone of Buckhannon, Sara Black of Elkins, Aryn Black and fiancé Tyler Dean of Elkins, and Jordan and Madison Smith of Clarksburg; one great grandson Colton Boone and one great granddaughter Emmalyn Grace Dean; three sisters: Irene and husband Jim Hood of South Hill, VA, Phyllis Gorney of Wilmington, IL, and Virginia Kline of Wooster, OH; and three brothers: Roy Dean and wife Sandy of Buckhannon, James Dean and wife Julie of Buckhannon, and David Dean of Herod, IL. Mr. Dean attended schools in Upshur County and was a veteran of the U.S. Army, having served in Hawaii from 1955-1957. He was employed by George Roessing and Sons for several years and was retired from Union Drilling with 25 years of service as a driller. He loved to tinker in his garage, do woodworking, watch old western television programs, and feed the birds and squirrels at his home. Family and friends will remember the smile which was always on his face. The family will receive friends on Monday, March 13, 2017, from 5-8:00 PM, at the Heavner and Cutright Funeral Chapel. The funeral will be held on Tuesday, March 14, 2017, at 1:00 PM, at the funeral chapel. Interment will follow in the Heavner Cemetery.

The family of William Junior Dean created this Life Tributes page to make it easy to share your memories.

Send flowers to the Dean family.