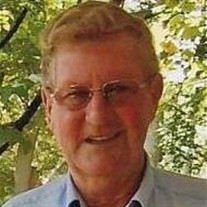 Wayne Edward George, 81, of Brighton Drive, the Turkey Run Road Community, passed away to the next life at his home, where he had lived for 50 years, on Saturday, October 3, 2015, after a pulmonary fibrosis illness and a 40 year Multiple Sclerosis disability. He was born on August 5, 1934, near Petersburg, WV, to the late William Edward “Eddy” and Bessie Autumn Hall George. He was united in marriage on August 8, 1954, to his wife of 61 years, Eva Jenette Stephens George, who survives. She was born in Ritchie County, and the couple met while Wayne was working with a timber crew there. Also surviving are six children: Wanda and husband Terry Moore, Carl George and wife Lisa, Mary and husband Larry Anderson, Eric George and wife Sandra, Stephen George and wife Kathy, and Jenette and husband Richard Frederick; fourteen grandchildren, all of the Buckhannon area except as noted: Travis Moore and wife Tasha, Misty Moore, April Browning, Amber Fultz, Heather Anderson, Tara Rice, Shauna Anderson of Pittsburgh, PA, LaTasha and husband Anthony Valentino of Saratoga Springs, NY, Mariah and husband Shane Myers, Matthew George and wife Ashley, Miranda George, Tommy Miller, Stephanie and husband Brent Davisson of Germany, and Tyler Frederick and wife Heather; nineteen great grandchildren; one great-great grandchild; one brother Rocky George and wife Judy of Petersburg; four sisters: Shirley Ebarb of Petersburg, WV, Nancy Self of New Creek, WV, Margie and husband Ray Self of Winchester, VA, and Dixie and husband Dennis Shirk of Baltimore, MD; and several nieces, nephews, and cousins. In addition to his parents, he was preceded in death by one brother Paul George; a three year old grandson Nathan Scott George in January 1984; and a one year old nephew Paul George in 1959. Wayne was an active member of the Heaston United Methodist Church at Hodgesville for many years. He deeply loved his family and was always willing to help family, friends, neighbors, and even strangers, in any way he could. He loved to hunt, chop wood, and work in the hayfield. Family gatherings, home-cooked meals, crackers and milk, candy, cookies, coffee, and Pepsi were all favorites of his. Children will remember him happily handing out Big Red, Juicy Fruit, or Spearmint gum to them. He was at peace leaving this world, but will truly be missed, and continuously loved and remembered by all who knew him. The family will receive friends on Tuesday, October 6, 2015, from 4-8:00 PM, at the Heavner and Cutright Funeral Chapel. The body will lie-in-state at the Heaston United Methodist Church in Hodgesville, on Wednesday, October 7, 2015, from 12-1:00 PM, the funeral hour, with Pastor Paul Stadelman and Gary Evans officiating. Interment will follow in the Mt. Lebanon Cemetery. In lieu of flowers, donations may be made to the Food Pantry of Upshur County at 68 College Avenue, Buckhannon, WV 26201.

Wayne Edward George, 81, of Brighton Drive, the Turkey Run Road Community, passed away to the next life at his home, where he had lived for 50 years, on Saturday, October 3, 2015, after a pulmonary fibrosis illness and a 40 year Multiple Sclerosis... View Obituary & Service Information

The family of Wayne Edward George created this Life Tributes page to make it easy to share your memories.

Send flowers to the George family.