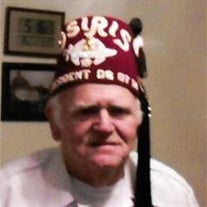 Warren Andrew (Andy) Losh, age 82, of Jack Lane, Buckhannon, died Thursday, October 8, 2015, at his home. He was born on April 19, 1933, in Grafton, WV, a son of the late Orma John and Ruth Elizabeth Stillwell Losh. His mother died during his infancy, and he was raised by his father and Gladys Grimm Losh. On July 25, 1970, he was united in marriage to Grace L. Marteney Losh, who survives. Also surviving are two daughters: Lynn and husband Steve Cvechko of Charleston, WV and Tiffany Losh of Clarksburg, WV; four grandchildren: Brent Cvechko and wife Lisa, John Cvechko and wife Kara, Caleb Connolly, and Wednesday Connolly; four great grandchildren: Abby, Gabrielle, Steven, and Kambria Cvechko; two sisters: Mary Webb of Weirton, WV and Rosalie and husband Pete Morris of Quincy, Florida; and one brother Robert Losh and wife Jean of Morgantown, WV. In addition to his parents, he was preceded in death by one sister Flora Bloomfield and two grandsons, Cameron and Jeffrey Connolly. Mr. Losh was a member of the Chapel Hill United Methodist Church, where he was very active with the men’s breakfast group and where he was in charge of the ushers for several years. He was a member of the Franklin Lodge #7 A.F. and A.M. and the Upshur County Shrine Club. He was very active in getting equipment donated for the Children’s Hospitals, and was instrumental in acquiring a van for the transportation of children to various hospitals; this was one of his greatest accomplishments. He was a member of the Tennerton Lions Club, the Silver-Haired Legislature, and he sat on the Advisory Board for the Area Agency on Aging in Petersburg. The body will be cremated. A memorial service will be held on Saturday, October 10, 2015, at 1:00 PM, at the Chapel Hill United Methodist Church, with the Rev. Helen Oates and Shane Smith officiating. Private interment will be held at the Hunt Cemetery at Mt. Hebron at a later date. In lieu of flowers, donations may be made to Shriners Hospitals for Children, 2900 Rocky Point Drive, Tampa, FL 33607.

Warren Andrew (Andy) Losh, age 82, of Jack Lane, Buckhannon, died Thursday, October 8, 2015, at his home. He was born on April 19, 1933, in Grafton, WV, a son of the late Orma John and Ruth Elizabeth Stillwell Losh. His mother died during... View Obituary & Service Information

The family of Warren Andrew (Andy) Losh created this Life Tributes page to make it easy to share your memories.

Send flowers to the Losh family.