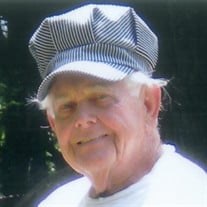 Warder Roscoe Cooper, age 89, of French Creek, died Monday, May 31,2021, at his home in the Frenchton community. He was born the eldest of five sons on July 27, 1931, in Elkins, WV, to the late Warder and Margie Collett Cooper. After graduating from Elkins High School, he served in active military in the US Army during the Korean War. Following his discharge in 1954, he was united in marriage to Wilda Jacqulyn Coberly Cooper on August 14, 1955, who survives. Also surviving are two sons: Sterling Glenn Cooper and wife Donna of French Creek and Allan Lane Cooper and fiancée Georgina Turman of Bedford, Virginia; two daughters: Suzanne Renée and husband Albert Cooke of Glen Burnie, Maryland and Kimberly Michelle and husband Rick Strevel of Culpeper, VA; five grandchildren and their spouses; seven step grandchildren and their spouses and 18 great grandchildren. In addition to his parents, he was also preceded in death by his first son, Stephen Gregory and his four brothers: Paul, Darrell, Curtis and Neal. After working as dispatcher with the WV State Police in Elkins, Roscoe moved his family to Baltimore and spent his working years at Seagrams-Calverts Distillery in Halethorpe, Maryland, working there thirty years while caring for and raising his family. Roscoe was a self-taught guitarist and played twenty-seven years in his Maryland bluegrass band- The Blueridge Mountaineers. After retirement he moved with his beloved Wilda back to West Virginia to the home in French Creek where he rededicated his life to Christ and played his guitar for the Lord with the weekly television program “Mission Outreach with Rev. Earl Cayton” as well as at many of the local churches in the area, calling the Mission Independent Church in Walkersville his home church. Roscoe was a well loved and respected man who never shared a mean word and always tried to get a laugh. Laughter was his legacy as well as kindness and love. He was a fine example of Gods Perfect love and will be missed tremendously. The family will receive friends on Tuesday, June 8, 2021, from 5-8:00 PM, at the Heavner & Cutright Funeral Chapel. The funeral will be held on Wednesday, June 9, 2021, at 2:00 PM, at the funeral chapel. Interment will follow in the Beechtown Cemetery, where the Upshur County Honor Guard will conduct graveside rites.

Warder Roscoe Cooper, age 89, of French Creek, died Monday, May 31,2021, at his home in the Frenchton community. He was born the eldest of five sons on July 27, 1931, in Elkins, WV, to the late Warder and Margie Collett Cooper. After graduating... View Obituary & Service Information

The family of Warder Roscoe Cooper created this Life Tributes page to make it easy to share your memories.

Send flowers to the Cooper family.