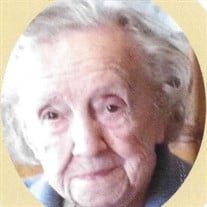 Mrs. Verma Tenney Campbell, age 100, of the Tennerton Community, left this earth and completed her heavenly journey, on Friday, November 11, 2016. She was born in Buckhannon on February 8, 1916, a daughter of the late Fred Isaac and Jenny Belle Barton Tenney. She was preceded in death by her husband of 69 years, John Wilson Campbell, in 2002. In addition to her parents and husband, she was also preceded in death by four sisters and one brother. Surviving are two sons: Mike Campbell and wife Beverly of Parkersburg and Steve Campbell and wife Jennifer of Chattanooga, TN; four grandchildren: Alex Campbell of Lexington Park, MD, Andrew Campbell of Franklin, TN, Evan Campbell of Marietta, OH, and Jonathan Campbell of Chattanooga; and four great grandchildren: Adyson Grace and Mac Wilson Campbell, both of Franklin, Caleb Campbell of Lexington Park, and Reagan Thorn of Parkersburg. Mrs. Campbell was a longtime employee of Strader’s Department Store in Buckhannon and was an active member of the Buckhannon Church of Christ for sixty years. She was known by many as the “Jelly Lady,” having canned hundreds of jars of jelly each summer through her 98th year. She delighted in sharing her jellies and jams with many of her friends. The family would like to express their deep appreciation to Christine Conley, who was her devoted caretaker for the past several years and to Connie Roth who gave so much love and effort to her care. The family will receive friends at the Heavner and Cutright Funeral Chapel on Monday, November 14, 2016, from 10-11:30 AM; a funeral service will begin at 11:30 AM, with Pastor David Hawkins officiating. Interment will follow in the Mt. Carmel Cemetery at Tallmansville. In lieu of flowers, donations may be made to WV Hospice, Samaritan’s Purse, or the charity of your choice.

Mrs. Verma Tenney Campbell, age 100, of the Tennerton Community, left this earth and completed her heavenly journey, on Friday, November 11, 2016. She was born in Buckhannon on February 8, 1916, a daughter of the late Fred Isaac and Jenny Belle... View Obituary & Service Information

The family of Verma Tenney Campbell created this Life Tributes page to make it easy to share your memories.

Send flowers to the Campbell family.