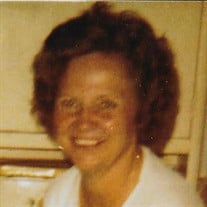 Vanna Anderson Cogar, age 93, of the Gaines Community, died Wednesday, May 18, 2016, at Holbrook Nursing Home. She was born on April 14, 1923, in Webster County, a daughter of the late Floyd and Francesenna Perrine Anderson. She was united in marriage on August 11, 1943, to George “Jim” Cogar who preceded her in death on December 25, 1977. She was also preceded in death by one daughter Joyce Sargent; one grandson Jamie Loudin; three brothers: Roland, Dolan, and Loren; four half-brothers: Willard, Ora, Flay, Ferry; one sister Rose Cutlip; and one daughter-in-law Leahbelle “Belle” Cogar. She is survived by one daughter Betty and husband Alex Carroll of Charles Town, WV; two sons: Jimmy Cogar and Floyd “Snork” and wife Shirley Cogar all of the Gaines Community; nine grandchildren; sixteen great grandchildren; two brothers: Hunter Anderson and wife Jayne of Rock Cave, Floyd Anderson Jr. and wife Janet of Buckhannon; three sisters: Peggy Daniels of Knoxville, TN, and Dottie and Louise Anderson both of Buckhannon; several nieces and nephews; and a special nephew Bob Cogar of Clarksburg. Vanna was a loving mother and grandmother. Memories of holidays and Sunday dinners will always be cherished by family and friends. Mrs. Cogar was a member of the Salem Ridge United Methodist Church. Vanna’s family would like to extend a special thank you to the caregivers that took care of Vanna at her home and also to the staff at Holbrook Nursing Home for their special care. Friends will be received at the Salem Ridge UM Church on Saturday, May 21, 2016, from 12-1:00 PM, the funeral hour, with Pastor David Jessie officiating. Interment will follow in the Salem Ridge Cemetery. In lieu of flowers, the family request donations be made to WV Hospice, 6 Hartman Plaza, Buckhannon, WV 26201.

Vanna Anderson Cogar, age 93, of the Gaines Community, died Wednesday, May 18, 2016, at Holbrook Nursing Home. She was born on April 14, 1923, in Webster County, a daughter of the late Floyd and Francesenna Perrine Anderson. She was united... View Obituary & Service Information

The family of Vanna Anderson Cogar created this Life Tributes page to make it easy to share your memories.

Send flowers to the Cogar family.