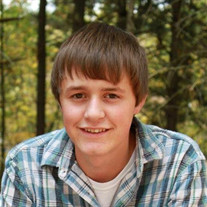 Tyler Glenn “Ty” Simmons, age 19, of the Frenchton Community, died Saturday, April 12, 2014. He was born on November 30, 1994, in Buckhannon, a son of Kevin L. and Lisa Ware Simmons who survive. Also surviving is one brother Joshua Simmons of French Creek and girlfriend Katlynn Myers; maternal Nana Sandra Lockwood of Flatwoods; paternal grandparents Richard and Betty Simmons of Pickens; and aunts and uncles: Cindy Ware, Kris Ware, Diane Bender, Jeff Tenney, Roberta Sears, and Patty Cowger. Special friends: Tim and Deanna Haddix and Travis and Brandy Sanders also survive. He was preceded in death by maternal grandparents Raymond and Sally Ware. Ty was a 2013 graduate of Buckhannon-Upshur High School and was employed by Highlands Drilling. He was an avid outdoorsman and especially enjoyed turkey hunting. The family will receive friends from 3-8:00 PM, on Wednesday, April 16, 2014, at the Heavner and Cutright Funeral Chapel. The funeral will be held at 11:00 AM on Thursday, April 17, 2014, at the funeral chapel with Pastor Terry Gower officiating. Interment will follow in the Beechtown Cemetery. In lieu of flowers, donations may be made to the St. Jude Children’s Research Hospital at P.O. Box 1000, Dept. 142, Memphis, TN 38148-0142.

The family of Tyler Glenn "Ty" Simmons created this Life Tributes page to make it easy to share your memories.

Send flowers to the Simmons family.