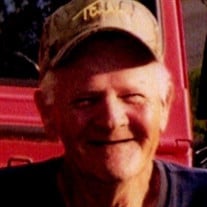 “Tinker” Roscoe Gail Linger, 82, of the Glady Fork Community, passed away on May 28, 2022, at United Hospital Center in Clarksburg. He was born on July 24, 1939, in Weston to the late Roscoe and Clesta Turner Linger; and his step- mother, the late Mabel Norman Linger. He was united in marriage to Josephine Coffman Linger on February 26, 1960, who preceded him in death on August 5, 2021. He missed the 61 years of arguing that his health began to decline after her passing. He is survived by three children: Vicky Wilson and husband, Joey, Joey Linger and wife, Janet, and Cindy Burke and husband, Daniel, all of Buckhannon; one granddaughter, Sydney Wilson and companion, Mason Suder, of Ellamore; two great-grandsons: Oliver and Clay Suder both of Ellamore; seven step-grandchildren: Landon, Gage, Keegan, and Tadumn Schoonover, and Jade, Makayla, and Aden Suder all of Buckhannon; sister, Darlene Boggs; good friends, Dave Workman of Weston and Clyde Campbell of French Creek; several nephews; and his dog, Crystal. In addition to his parents and spouse, he was preceded in death by two infant grandchildren: Windy Dawn Wilson and Joey Scott Wilson II; step- brother, Jimmy Cogar; step uncle, Kenny Norman; and good friends, Jim Lane and Harry Graff. Tinker left school as a teenager to begin working. His past occupations included working in the glass factories around Weston, working on the road crew building I-79, and working on drilling rigs before he and his wife became self- employed. In the late 60s they had a hot dog stand in Deanville and eventually opened a bar called the Wrangler’s Club in Weston. His favorite past time when he was younger was billiards. He was often a pool shark and saw no problem taking peoples’ money who were foolish enough to lay it on the table. After selling the bar, he and his wife moved to Upshur County in 1975 where they bought a farm, eventually opening Linger’s Greenhouse. He and his wife operated Linger’s Greenhouse until they retired. They were two of the founding members of the farmers market selling produce grown on their farm. After retirement he joined a local K9 search and rescue with his since deceased dog Bo and assisted law enforcement with locating the lost, missing, or fleeing. When Bo needed laser surgery to remove a mass from his leg, Tinker sold his boat to afford the surgery saying, “he’s part of the family.” He fished like a religion, often fishing from sunset to sunrise in the summer. He was a lifetime member of the Stonecoal Lake Fishing Club. He enjoyed coon hunting, deer hunting, and bear hunting. He was also skilled in trapping. When money was tight in the winter, he would often run trap lines and sell the furs. He was a slick talker who many said he could sell snow to an Eskimo. He was a frequent attendee of auctions, always looking for a good deal. Some called him the mayor of the neighborhood, but he didn’t like that title, he just liked to drive around and keep an eye on things after he retired. The family would like to express their gratitude to the staff of United Hospital Center and WVU Hospice. In honoring Tinker’s wishes, he will be cremated, and no services are to be held. Anyone choosing to honor Tinker’s memory can donate to a charity of their choice; or go fishing with a loved one and make memories.

The family of "Tinker" Roscoe Gail Linger created this Life Tributes page to make it easy to share your memories.

Send flowers to the Linger family.