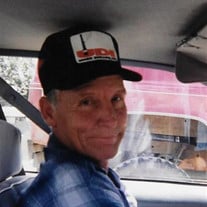 Terry Neil Hinchman, Sr., age 70, of Hinkleville, died Friday, July 20, 2018, at his home. He was born on October 5, 1947, in Adrian, WV, a son of the late Clyde “Porky” and Lottie E. Simons Hinchman. On April 8, 1978, he was united in marriage to Candy Gay Cutlip Hinchman who survives. Also surviving are three sons: Terry Neil Hinchman, Jr. and wife Angie of Lorentz, Michael Paul Hinchman and companion Regina Johnston of Buckhannon, and Scottie Dale Hinchman of Buckhannon; six grandchildren: Haley, Devan, Jaiden, Greyson, Brooke, and Harley; two great grandchildren: Anna and Avori; several nieces and nephews; and his beloved Dachshund, Bowser. In addition to his parents, he was also preceded in death by seven sisters: Margaret Lee, Anna Louise, Betty Lou, Carolyn Sue, Katherine Sue, Charlotte, and Sarah Ann; and four brothers: Clyde “Bugs” Hinchman, Jr., Teddy Joe Hinchman, Charles William Hinchman, and Paul Z. Hinchman. Terry was a member of the Cornerstone Community Church. He loved participating in shooting competitions, was an avid hunter, and raised rabbit beagles. He was currently serving as President of the Upshur County Beagle Club. Terry was a simple man who had the extraordinary ability to make people smile with his witty humor and often times greatly exaggerated stories and tales. He will be sorely missed by all those who knew and loved him. The family will receive friends on Saturday, July 21, 2018, from 5-8:00 PM, at the Heavner and Cutright Funeral Chapel. The funeral will be held on Sunday, July 22, 2018, at 1:00 PM, at the funeral chapel, with the Rev. Robert F. Heavner officiating. Interment was held at the Hampton Cemetery.

The family of Terry Neil Hinchman, Sr. created this Life Tributes page to make it easy to share your memories.

Send flowers to the Hinchman family.