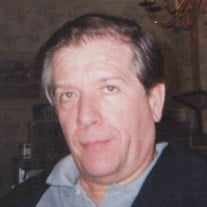 Stanley C. “Butch” Makowsky, age 73, of Buckhannon, and formerly of Virginia, passed away on Friday, October 8, 2021, at the Holbrook Healthcare Center in Buckhannon, where he had been a resident for the past two years. He was born in Newark, NJ on October 12, 1947, a son of the late Stanley F. and Virginia F. Boni Makowsky. He is survived by one brother Francis J. Makowsky (Leann Kuchenbuck); one sister Margaret Makowsky Molloy (Thomas); one nephew Justin Molloy (Kelly); two nieces: Nicole Brecher (David) and Sarah Boni Molloy; three great nephews: Zachary Brecher, Maxwell Brecher, and Liam Molloy; special cousin Margaret Posey, who cared for him in his final years; numerous other cousins, and many longtime friends, especially Carmine Dalessandro. In addition to his parents, he was also preceded in death by a special aunt and uncle, with whom he lived for a period of time in his younger years, Polly and Wilson Mouser. Mr. Makowsky grew up in Newark, NJ and graduated from Westside High School. He then served in the US Air Force from 1971-1974 and especially enjoyed his time stationed in Alaska and San Diego, where he earned a BS in Business Administration from San Diego State University. He also held a Master of Business Administration degree from Keane University and an MBA in Public Accounting from St. John’s University. He worked in the Department of Energy-Tennessee Valley Authority and retired as an auditor from HUD in Washington, DC. While living in Virginia during his retirement, he enjoyed taking scenic trips, working out with his friend Phil Cuellar at the gym, and meeting with his buddies for breakfast. Stanley had a good sense of humor, was kind-hearted, and always eager to help anyone in need, especially at Christmas. He was a life-long learner and was well-informed on a variety of subjects. Private graveside services will be held at the Gate of Heaven Cemetery in East Hanover, New Jersey, where he will be interred beside his mother and father. In lieu of flowers, memorial contributions may be made to the American Kidney Fund at www.kidneyfund.org.

Stanley C. &#8220;Butch&#8221; Makowsky, age 73, of Buckhannon, and formerly of Virginia, passed away on Friday, October 8, 2021, at the Holbrook Healthcare Center in Buckhannon, where he had been a resident for the past two years. He was born... View Obituary & Service Information

The family of Stanley C. Makowsky created this Life Tributes page to make it easy to share your memories.

Send flowers to the Makowsky family.