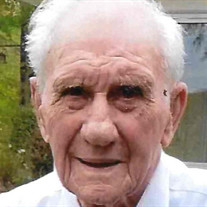 Shirley Patrick Hite of Grafton, the beloved first of twelve children of the late Loretta and Leland Hite, died on Sunday, December 16, 2018, at St. Joseph’s Hospital in Buckhannon. He was born April 1, 1924, at Dusk Camp, Gilmer County, WV. A 1942 graduate of Tygart Valley High School, Shirley proudly served in the US Army during WW II. He was attached to the 26th Anti-Aircraft Artillery. As with many others, he came to the European Campaign of WW II by the landing on Omaha Beach in Normandy. He rose to the rank of Master Sergeant and served again stateside during the Korean Conflict. A son of a coal miner, Shirley had a long history in coal mining. He worked for Bethlehem Coal, Moss Coal & Coke, Peerless Coal and Grafton Coal Co. With two partners, he started AC&H Coal Co before developing HW&C Coal with two other partners. He finished his career with his sons as his partners. Shirley was President of the Barbour County Smoke Eaters Mine Rescue for many years. With his credentials and his straight forward management, Shirley was respected by those who worked with him through the many years. Shirley was also proud of his thirty-five years plus with the Scottish Rite, fifty years plus with the York Rite and fifty years plus with the Pilgrim Templar. It was the Riverside Lodge 124, Cass, where he gained 3rd degree Master Mason, the Beverly Chapter for his York Rite and Osiris Wheeling to become a Shriner. He also was a seventy year plus member of the VFW. In 1994, he received his diploma from AB University of Hard Knocks. A longtime resident of Valley Head, Shirley married Mary Frances Hite in 1946. Together, they had several businesses and proudly raised three children. Shirley helped develop the Valley Head Volunteer Fire Department. He was also an influence in many lives as a youth baseball coach. After his divorce from Mary Frances in 1985, Shirley became a long time resident of Grafton. He spent many years on Tygart Lake enjoying boating and waterskiing. He enjoyed a long relationship with Phyllis Clayton and they married in 2006. She preceded him in death in 2016. Shirley loved his Pittsburgh Pirates, Pittsburgh Steelers and WVU Mountaineers throughout his 94 years. In addition to his parents and his wife, he was preceded in death by seven siblings: Leland Jr., Phyllis, Lola Barbralee, Patricia, Gilbert and Randall Hite, Lucille Sullivan as well as his daughter-in-law, Linda Hite. Shirley is survived by his children: Steven M. Hite, Christopher L. and Patsy Hite, and Cynthia G. Hite and Robert E. Beverly; his grandchildren: Anissa and John Davis, Michael and Desi Hite, Tracy and Billy Hurst, Courtney Hite and Sandeep Vennam; his great grandchildren: Cara Carpenter, Cassie Davis, Jordan Sine, Kyndal Davis, Abigail Hurst, Baylee Hurst, Alex Hite, Leela Hite Vennam, Florilinda Hite and Sai Suraj Hite Vennam; and his great-great grandchildren: Bryson and Abbigail Waugh and John Ryan Carpenter. Shirley also leaves his sisters: Geraldine Sallie, Wilma Jean Lee, Peggy Runner, and Jo Marouse; his sisters-in-law: Susan Hite and Barb Hite; and many loved nieces and nephews. In addition, he is survived by the family of his wife, Phyllis Hite. The family would like to thank St. Joseph’s Hospital, Buckhannon, for their excellent care as well as Brenda and Brad Hamrick for their love and time during his last days. The family will receive friends at the Heavner and Cutright Funeral Chapel on Thursday, December 20, 2018, from 12 Noon to 3:00 PM, the funeral hour, with Rev. Donald Butcher officiating. Graveside services and interment will be held on Friday, December 21, 2018, at 11:00 AM, at the West Virginia National Cemetery in Pruntytown, where the Upshur County Honor Guard and the Grafton Masonic Lodge # 15 will conduct graveside services. In lieu of flowers, donations may be made to the St. Joseph’s Hospital Foundation C/O Lisa Wharton, Director, Amalia Drive Buckhannon, WV 26201.

The family of Shirley Patrick Hite created this Life Tributes page to make it easy to share your memories.

Shirley Patrick Hite of Grafton, the beloved first of twelve...

Send flowers to the Hite family.