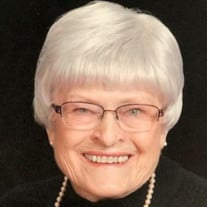 Shirley Jean (Doty) Helmick, 87, passed away August 18, 2021, in Buckhannon WV. She was born and raised in Three Forks, MT, the youngest of four children of Rose Agnes Walbert from Willow Creek, MT and Orville William Doty from Bargersville, IN. Shirley was a kind-hearted, gentle and humble person devoted to her husband and their six children. She spent the bulk of her adult life in Townsend, MT where she worked tirelessly to create happy memories and a warm comfortable home. Shirley attended schools in Three Forks. After graduation, she was a telephone operator in Yellowstone Park. In Three Forks, she met Troy Helmick, a surveyor from Frenchton, WV working for the Bureau of Reclamation. They were married in 1954 and celebrated 64 years together. In their early years, the couple lived in Northern Montana where Troy worked on Bureau of Reclamation projects in Box Elder and Tiber Dam. Eventually, the family were transferred to Canyon Ferry Dam near Helena in 1956 and then to Townsend in 1960 where they raised their children. While running the household, Shirley was active in the community and worked full time as a grocery clerk, bank teller and later bookkeeper. Among her many service roles were support to school events, Scouting, Home Extension Club, March of Dimes, craft fairs, fund raisers and other civic and social programs. She was a lifelong member of the Holy Cross Catholic parish in Townsend and served as Treasurer for local charities. She was a President of the American Legion Auxiliary and supported veterans, active-duty service members and their families through holiday teas honoring Gold Star Mothers, patriotic poster contests for school children and other activities. She belonged to the Townsend Jaycees Auxiliary and took an active role with the Broadwater County Historical Museum, the Military Affairs Committee, the World Atlatl Association and the Crimson Bluffs Chapter of the Lewis and Clark Trail Association. She retired from Lundy’s Food Market in 1995 after 28 years. In retirement, she traveled throughout the region and visited family all across the country. Since 2018, she was in the loving hands of caregivers at Serenity Care Home in Buckhannon in close proximity to several family members. She was proceeded in death by her husband Troy, her parents, a brother William Doty of Sacramento, CA, a sister Virginia McViegh of San Francisco CA and her youngest daughter Char Pentecost of Helena, MT. She is survived by her brother Don Doty of Three Forks, MT and her children Rhonda Helmick, Buckhannon, WV, Brent (Lydia) Helmick, Marina, CA, Leslie (Joe) Owen, Buckhannon, WV, Dean (Pamela) Helmick, Plattsmouth, NE and Coleene (Jon) Rychalski, Alexandria, VA. Shirley had 12 grandchildren and 8 great-grandchildren. A private funeral Mass for family will be held in West Virginia followed in the Spring of 2022 by a Memorial Service in Montana. In lieu of flowers, memorial contributions can be made to the Broadwater County Museum, PO Box 614, Townsend, MT 59644, Montana State Historical Society, c/o Development, PO Box 201201, Helena, MT 59620, or American Legion Post 42 Auxiliary.

The family of Shirley Jean Helmick created this Life Tributes page to make it easy to share your memories.

Send flowers to the Helmick family.