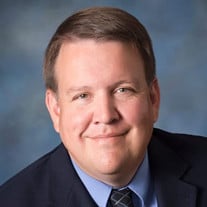 Shawn Douglas Tucker, loving and devoted husband and father, age 37, of South Tenney Drive, Buckhannon, died Sunday, February 24, 2019, at his home, surrounded by his loving family. He was born May 18, 1981, in Philippi, a son of Douglas Duane and Mary Marie Clevenger Tucker, who survive. On June 17, 2006, he was united in marriage to Adrienne Grier Hypes Tucker, who survives. Also surviving are their three children, all of the home: Madelyn May, Brooks Douglas, and Molly Marie Tucker; one sister Melissa and husband Eric LePlatt of Harper’s Ferry; paternal grandmother Irene Morgan; maternal grandfather Charles Clevenger; and five nieces and nephews: Andrew, Patton, Sheridan, Asher, and Griffin LePlatt. He was preceded in death by his paternal grandfather Maynard O. Tucker and his maternal grandmother Ruth B. Clevenger. Shawn was a graduate of Fairmont State University and was registered as a Professional Engineer in WV. He had been employed as a civil engineer by Chapman Technical Group since May 2003, and was the General Manager of the Buckhannon office and principal airport design and construction Project Manager. Countless lives have been touched by Shawn’s focused, driven, and passionate leadership and activity in the community. He served on the Board of Directors for the Buckhannon-Upshur Chamber of Commerce, was the Treasurer and Secretary for the Upshur County Youth Soccer Association, and coached multiple soccer teams. Shawn was the visionary who initiated the idea and garnered community support for the Upshur County Recreation Complex. He created the organization, built the framework, and actively oversaw its management while serving as the President of the Board of Directors. Shawn championed the idea of having all of the various sports leagues work together for a common goal. He was a believer in youth sports and the benefits they provided not only for the kids but the community as well. Shawn attended First Baptist Church of Buckhannon. He was an avid WVU sports fan and enjoyed camping, golf, skiing, and hunting, especially his annual hunting trips with his father. The family would especially like to thank the nurses, doctors, and staff in the Bone Marrow Transplant Unit at Ruby Memorial Hospital and at the WVU Cancer Center for their compassionate care for not only Shawn but also the entire family. The family will receive friends on Thursday, February 28, 2019, from 3-8:00 PM, at the Heavner and Cutright Funeral Chapel. The funeral will be held on Friday, March 1, 2019, at 11:00 AM, at the First Baptist Church in Buckhannon, with Pastor Jay Teodoro officiating. Interment will follow in the Harmony Grove Baptist Church Cemetery at Grafton. In lieu of flowers, donations may be made to the Rosenbaum Family House, PO Box 8228, Morgantown, WV 26506, (www.rosenbaumfamilyhouse.com/donate/#givingopps) or the Upshur County Youth Soccer Association, memo: In Memory of Shawn Tucker, PO Box 293, Buckhannon, WV 26201.

Shawn Douglas Tucker, loving and devoted husband and father, age 37, of South Tenney Drive, Buckhannon, died Sunday, February 24, 2019, at his home, surrounded by his loving family. He was born May 18, 1981, in Philippi, a son of Douglas Duane... View Obituary & Service Information

The family of Shawn Douglas Tucker created this Life Tributes page to make it easy to share your memories.

Send flowers to the Tucker family.