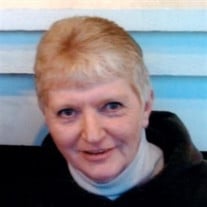 Sarah Jane Smith, age 56, of Kesling Mill Road, Buckhannon, died Saturday, May 2, 2015, at Broaddus Hospital in Philippi, WV. She was born on June 11, 1958, in Buckhannon, a daughter of the late Stewart Cutright, Jr. and Wilma Dove Marceau Cutright. In addition to her parents, she was preceded in death by one son Robert Eric Cannon and one sister Shelley Cutright. She was united in marriage on December 27, 1993, to Steve Smith, who survives. Also surviving are two daughters: Jessica and husband Aaron Stokes of Buckhannon and Crystal and husband Thomas Crites of French Creek; three sons: Justin White of Buckhannon, Jeremy White of North Carolina, and Benny Smith and wife Megan of Buckhannon; six grandchildren: Robert, Brandon, Braydon, Alexander, Brock, and Lincoln; three sisters: Sue and husband Dave Wilson, Janny and husband Servando Arredondo, and Becky Long, all of Buckhannon; four brothers: Steve Cutright and wife Becky of Fairmont, Jim Cutright of North Carolina, Bob Cutright and wife Judy of Buckhannon, and John Cutright of Buckhannon; several nieces and nephews; and her beloved dog Maddie. Mrs. Smith was a homemaker and a Methodist by faith. The family will receive friends on Tuesday, May 5, 2015, from 5-8:00 PM, at the Heavner and Cutright Funeral Chapel. The funeral will be held on Wednesday, May 6, 2015, at 11:00 AM, at the funeral chapel with Rev. Jerry Lee officiating. Interment will follow in the Kesling Mill Cemetery. In lieu of flowers, donations may be made to assist the family with expenses.

The family of Sarah Jane Smith created this Life Tributes page to make it easy to share your memories.

Send flowers to the Smith family.