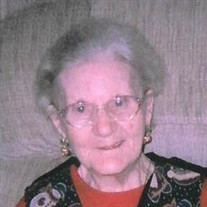 Sarah Elizabeth Kerns, age 92, of Tahoe Street, Buckhannon, died Thursday, August 20, 2015, at Crestview Manor Nursing Home in Jane Lew. She was born on August 20, 1923, in Ellamore, a daughter of the late Jesse Glen and Lena Miller Cochran. On October 18, 1945, she was united in marriage to Lindon Lorenza Kerns, who preceded her in death on April 26, 1985. She is survived by two sons: Carroll Kerns and wife Barbara of Buckhannon and Herman Cecil Kerns and wife Georgia of Plattsmouth, Nebraska; one daughter Hilda and husband Terry Ketterman of Buckhannon; three grandchildren: Chris, Keith, and Brad Kerns; two great grandchildren: Gabrielle and Joe; and several nieces and nephews. In addition to her parents and husband, she was also preceded in death by one brother Howard Carroll Cochran. Mrs. Kerns was a member of the Upshur CEOS and the Gertrude Chapel Church at Ellamore. She was proud to have served the United States Government as a munitions maker for the U.S. Navy during WWII and was a former employee of Triumph Explosives in Elkton, MD, where she made fireworks. She enjoyed reading, travelling, needlepoint, and embroidering. The family would like to extend their sincere appreciation to the staff of the Crestview Manor Nursing Home for the care given to their mother. The family will receive friends on Sunday, August 23, 2015, from 6-8:00 PM, at the Heavner and Cutright Funeral Chapel. The funeral will be held on Monday, August 24, 2015, at 11:00 AM, at the funeral chapel, with the Rev. M. Jack Bohman officiating. Interment will follow in the Mt. Union Cemetery.

The family of Sarah Elizabeth Kerns created this Life Tributes page to make it easy to share your memories.

Send flowers to the Kerns family.