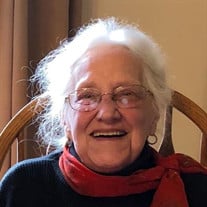 Ruth Annabelle Thompson, age 94, of Bendale Road, Weston, died Thursday, December 13, 2018, at her home. She was born on September 26, 1924, in Lewis County, a daughter of the late Harry S. and Lorraine Hughes Bee. She was preceded in death by her husband, Rue C. Thompson on January 9, 2007. She is survived by one daughter, Susan Regina Shock and husband Les of Eureka, South Dakota; one son, the Rev. Mr. Rue C. Thompson, II and wife Diana of Buckhannon; six grandchildren: Cheryl and husband Jerry Moore, Heather and husband Dan Brunton, Gwendolyn and husband Michael Masterman, Heidi and husband Phillip Keith, Braden Thompson, and Andrea Thompson; ten great grandchildren; one great-great grandson; one sister Patricia Smith of Weston; and her beloved dog, Molly. In addition to her husband, she was also preceded in death by a stillborn daughter and by three brothers: Harry, Donald, and Robert Bee. Mrs. Thompson was a devoted Catholic and parishioner of the St. Patrick Roman Catholic Church in Weston, where she had been a member since 1972. She was a part of the Catholic Daughters and the TOPS group. Annabelle was a talented quilter and presented approximately 50 of her hand-stitched quilts to her children and grandchildren over the years. She had been employed as a Nurse’s Aide at the City Hospital in Weston and the Weston State Hospital, with about 20 combined years of service. The family will receive friends on Sunday, December 16, 2018, from 6-8:00 PM at the Heavner and Cutright Funeral Chapel in Buckhannon, where the Rosary will be prayed at 7:30 PM. A Mass of Christian Burial will be held on Monday, December 17, 2018, at 10:00 AM, at the Holy Rosary Catholic Church in Buckhannon, with the Rev. Fr. Joseph McLaughlin, S.M. as celebrant. Interment will follow in the Forest Lawn Memorial Gardens in Weston. In lieu of flowers, donations may be made in Annabelle's memory to St. Patrick School, 224 Center Avenue, Weston, WV 26452.

Ruth Annabelle Thompson, age 94, of Bendale Road, Weston, died Thursday, December 13, 2018, at her home. She was born on September 26, 1924, in Lewis County, a daughter of the late Harry S. and Lorraine Hughes Bee. She was preceded in death... View Obituary & Service Information

The family of Ruth Annabelle Thompson created this Life Tributes page to make it easy to share your memories.

Send flowers to the Thompson family.