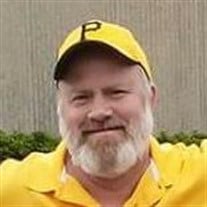 Ronald Ray Godfrey, age 54, of Bridgeport, WV, died Wednesday, May 8, 2019. He was born January 12, 1965, in Buckhannon, a son of the late Robert Roscoe Godfrey and Gladys Harriet Simons Godfrey Rutherford and step-father Clarence “Pete” Rutherford, who both survive. On September 2, 2009, he was united in marriage to Amanda Chapman Godfrey, who survives. Also surviving are three sons: Jeff, Jacob, and Braxton Godfrey; one daughter Carrie Godfrey; two grandchildren: Liam Shingleton and Elijah Godfrey; three brothers: Robert Godfrey, Jr. of French Creek, Steve Godfrey of Tunnelton, and Greg Godfrey of Morgantown; four sisters: Bonnie Ours and Connie Reese, both of Buckhannon, Kristie Zink of Philippi, and Lisa Tenney of Buckhannon; and several nieces and nephews. In addition to his father, he was also preceded in death by one sister Judy Lynn Davis. Mr. Godfrey was a veteran of the U.S. Marine Corps, and an avid fan of the WVU Mountaineers and Pittsburgh Steelers. He enjoyed hunting, fishing, and gardening, and dearly loved his family. The family will receive friends on Sunday, May 12, 2019, from 2-5:00 PM, at the Heavner and Cutright Funeral Chapel. The funeral will be held on Monday, May 13, 2019, at 1:00 PM, at the funeral chapel. Interment will follow in the Heavner Cemetery—Veterans Section, where the Upshur County Honor Guard will provide military honors.

The family of Ronald Ray Godfrey created this Life Tributes page to make it easy to share your memories.

Send flowers to the Godfrey family.