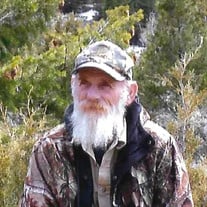 Ronald Wayne Brown, age 68, of the Glady Fork Community, died Tuesday, February 27, 2018, at his home surrounded by his loving family. He was born on November 12, 1949, a son of the late Junior Cecil and Doris Lea Booth Brown. On August 5, 1978, he was united in marriage to Karen Ensor Brown, who survives. Also surviving are one daughter Kendra and husband Dustin Wilson of Bailey Ridge; one granddaughter Mackenzie Wilson of Bailey Ridge; one brother Charles D. Brown and wife Brenda of Christiansburg, VA; one sister Robin L. and husband Basil Tenney of Ellamore; and several nieces and nephews. In addition to his parents, he was also preceded in death by one nephew Jeremy Brown and his twin brother, Donald Layne Brown, on November 27, 2017. Ron was a 1970 graduate of Buckhannon-Upshur High School and was a veteran of the U.S. Army, having been stationed in Alaska, Germany, and other places where he served on a high-altitude rescue team, completing 44 static jumps. He was a true outdoorsman in every sense; his outdoor activities included: hunting, fishing, hiking, kayaking, camping, and hunting for ginseng, mushrooms, and horn sheds. He took many hunting trips to Colorado with his twin brother and together they shared their love for the outdoors. He was a “people person” and always a selfless gentleman. Whether he was sitting around the campfire or playing cards with his friends, he brought smiles to each of their faces. Together with his wife, he enjoyed recreating nature in many ponds and water gardens around their home. Just last year, he was able to go skydiving with his wife and daughter—a very special memory for them. He dearly loved all his family, especially his granddaughter and nieces and nephews, and will be forever missed. At Mr. Brown’s request, his body was cremated. A gathering of family and friends will be held on Friday, March 2, 2018, from 4-6:00 PM, at the Heavner and Cutright Funeral Chapel.

Ronald Wayne Brown, age 68, of the Glady Fork Community, died Tuesday, February 27, 2018, at his home surrounded by his loving family. He was born on November 12, 1949, a son of the late Junior Cecil and Doris Lea Booth Brown. On August 5,... View Obituary & Service Information

The family of Ronald Wayne Brown created this Life Tributes page to make it easy to share your memories.

Send flowers to the Brown family.