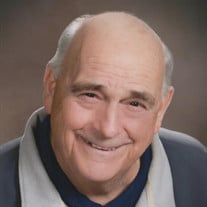 Rodger David Lundell, age 77, of Buckhannon, passed away peacefully surrounded by his family and went to be with the Lord on Tuesday, March 9, 2021 at the WV Caring Hospice Center in Elkins, WV after an eight-year battle with cancer. He was born in Shinnston, West Virginia. He is survived by his wife of 49 years Shirley (Hardman) Lundell, son Brian Lundell and wife Icle, son Eric Lundell and wife Sandy, and son Rex Lundell; his four grandchildren, Abigail Naughton, Jaiden Lundell, Vincent Lundell, and Evelyn Lundell; and his sisters: Marilyn Karickhoff and Sharon Ayers. Preceding him in death were his parents Vincent and Beatrice Lundell and siblings Jimmy, Wanda, Nancy and Beverly. Rodger graduated from Buckhannon-Upshur High School, received a Bachelor’s degree in Forestry and a Master’s degree Recreation with emphasis on Outdoor Recreation. He served his country in the United States Army Reserves for six years in the Clarksburg area during the Vietnam Era as a Communications Specialist. Early in his career he was a 4-H Agent in Wetzel County. Rodger also established the Parks and Recreation Service in Upshur County where he planned and implemented many parks with services for families. Later in his career Rodger was a Realtor in North Central West Virginia with Griffin Real estate and later an Associate Broker for Old Oak Properties, retiring in 2019. Rodger completed a long-time life goal of publishing a book entitled “A lifetime of Grouse and Woodcock Hunting with English Setters” through Dorrance Publishing Co which celebrates the great joy he had of spending time bird hunting in the outdoors with his Pointmaster English Setters. He also shared his love of the outdoors with his sons by often hunting, fishing, and hiking with them and enjoying our beautiful state. He will be deeply missed by his family, friends and all who knew him. The family will receive friends to celebrate his life at the Heavner & Cutright Funeral Chapel on Friday, March 19, 2021, from 5-7:00 PM with a prayer service beginning at 6:30 PM. As a lifelong member of the Catholic Church, a Mass of Christian Burial will be held on Saturday, March 20, 2021, at 10:00 AM, at Holy Rosary Catholic Church with the Rev. Fr. Edward Tetteh, S.V.D. as celebrant and Deacon Rue Thompson assisting. Interment will follow at the Upshur County Memorial Park. In lieu of flowers, donations can be given to Holy Rosary Catholic Church, 34 Franklin St., Buckhannon, WV 26201 or to the Cancer facility for Davis Foundation at 801 Harrison Ave., Elkins, WV 26241.

Rodger David Lundell, age 77, of Buckhannon, passed away peacefully surrounded by his family and went to be with the Lord on Tuesday, March 9, 2021 at the WV Caring Hospice Center in Elkins, WV after an eight-year battle with cancer. He was... View Obituary & Service Information

The family of Rodger David Lundell created this Life Tributes page to make it easy to share your memories.

Send flowers to the Lundell family.