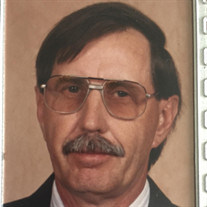 Robert H. Kittle, age 74, passed into the loving arms of our Lord on November 1, 2017, in his home surrounded by family. Robert was born January 30, 1943, to Gertrude Rowan and Junior Kittle. He is survived by his wife of over 51 years, Deborah Colerider Kittle; their daughter, Cindy McQuiston and her husband John, her two children, Kaitlyn and Andrew McComas, all of Kennett Square, Pennsylvania; and their son, Rob Kittle and his wife, Tonya, and their two daughters Taylor and McKenzie all of Buckhannon, West Virginia. He was one of nine children. He is also survived by five sisters, one brother, and two brothers-in-law. In addition to his parents, two brothers also preceded him in death. “Bob” was a lifelong resident of Upshur County and a member of the French Creek United Methodist Church and the French Creek Lions Club for many years. He was the 13th employee hired when Corhart opened in Buckhannon; he started as a kiln operator and upon his retirement in 1978 held the role of General Foreman. Most people will remember him as the founding member of Robert Kittle Construction Company, Inc. The homes he built in the area will remain a legacy to his talent as a craftsman for many years to come. An avid car enthusiast, Bob built, restored, and enjoyed racing cars in his younger years. He also enjoyed travelling with his wife, including two very memorable trips to Disney with their children and grandchildren. He will be loved and remembered by his family, crew, and many others who knew him as “Bob-Bob”. Bob and his protector and loving companion, Corky, will be cremated. Private family services will be held at a later date. In lieu of flowers, his family requests donations to the American Cancer Society in his memory after his long battle with cancer. The family extends their gratitude to the members of West Virginia Hospice who provided care to Bob and us during this difficult time.

Robert H. Kittle, age 74, passed into the loving arms of our Lord on November 1, 2017, in his home surrounded by family. Robert was born January 30, 1943, to Gertrude Rowan and Junior Kittle. He is survived by his wife of over 51 years, Deborah... View Obituary & Service Information

The family of Robert Kittle created this Life Tributes page to make it easy to share your memories.

Send flowers to the Kittle family.