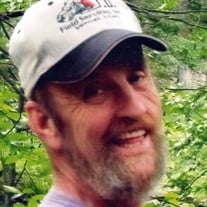 Richard Clay "Dick" Barnhart, age 71, of Rock Cave, West Virginia, died Wednesday, May 4, 2022, at United Hospital Center in Bridgeport, West Virginia. Richard was born August 21, 1950, in Port Huron, Michigan, a son of the late Clay and Madelyn Avery Barnhart. He was united in marriage on February 14, 1986, to Kathy Jane Walton Barnhart, who survives. In addition to his wife, he is survived by three children, Richard Chad Barnhart of AL, Rodney Charles Barnhart of MI, and Danielle Paige Chidester (James, Jr.) of Rock Cave, WV; three grandchildren, Kelsey Barnhart, Alyssa Barnhart, and Brogan Clay Chidester; two siblings, William Barnhart (Leny) of AL and Linda Carter of MI; and his sister-in-law, Judy Barnhart. In addition to his parents, he was also preceded in death by one brother, Bobby Barnhart. Richard was a former employee of Union Drilling. He was baptized at and attended the Mt. Pleasant Baptist Church in Arlington, WV and enjoyed spending time with his family. A funeral service will be held on Monday, May 9, 2022, beginning at 11:00 AM, at Heavner and Cutright Funeral Chapel with Pastor Michael Wamsley officiating. Interment will follow at Oak Grove Cemetery in Kanawha Head.

The family of Richard Clay "Dick" Barnhart created this Life Tributes page to make it easy to share your memories.

Send flowers to the Barnhart family.