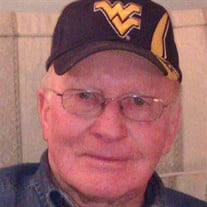 Rex Nelson Reeder, age 80, of Buckhannon, the Tennerton Community, died Friday, December 30, 2016, at Ruby Memorial Hospital in Morgantown. He was born on May 11, 1936, at Etna, a son of the late French and Rachel Hosaflook Reeder. On April 26, 1963, he was united in marriage to Shirley Raikes Reeder who survives. Also surviving are two daughters: Natalie Dawn Reeder and Lisa Jean Reeder, both of Buckhannon; niece Sandra Byrd Currence and husband Ken and nephew Steven Carpenter and wife Marilyn; and several other nieces, nephews, and great nieces and great nephews; and the “good child,” Sonnie Anthony. In addition to his parents, he was preceded in death by two sisters: Kathleen Reeder Byrd and Mildred Reeder Carpenter; and one niece Jayne Byrd Carson. Upon graduation from high school, Rex attended both Glenville State College and West Virginia Wesleyan College. He joined the U.S. Army in 1959, serving until 1962, with most of his time spent in France, and was then briefly employed by MonPower. He began work at Corhart Refractories in 1963, working his way up to Supervisor before his retirement in 1992. Following retirement, Rex continued to farm, which he had done his whole life. His devotion to countless organizations was unwavering; he served as the Tygart Valley Soil Conservation Supervisor for Upshur County, President of the Farm Bureau, Commander of the American Legion Post 148, member of the Tennerton Lions Club, where he served in many capacities and received multiple awards, including the Leonard Jarrett and Melvin Jones Awards, board member of Southern States, member of the Cattleman’s Association, President of the Livestock Association, member of the Upshur County Farmland Preservation Board, R.C. and D, Upshur Youth Livestock Association, Wes-Mon Ty, Tennerton PSD, Chairman of the Grassland Steering Committee, Secretary and Treasurer of the Lowe Bartlett Armstrong Trust, and former member of 4-H and FFA. He attended the State Fair of West Virginia for over 58 years and thoroughly enjoyed every year. He loved travelling, and especially taking Sunday drives throughout the state. Rex had a deep love for West Virginia, was a recipient of the Golden Horseshoe Award as a youth, and was a loyal fan of the West Virginia University Mountaineers. The family will receive friends on Wednesday, January 4, 2017, from 3-8:00 PM, at the Heavner and Cutright Funeral Chapel. The funeral will be held on Thursday, January 5, 2017, at 1:00 PM, at the funeral chapel, with the Rev. Robert F. Heavner and the Rev. Gary Rapking officiating. Interment will follow in the Upshur County Memorial Park, where the Upshur County Honor Guard will conduct military honors.

Rex Nelson Reeder, age 80, of Buckhannon, the Tennerton Community, died Friday, December 30, 2016, at Ruby Memorial Hospital in Morgantown. He was born on May 11, 1936, at Etna, a son of the late French and Rachel Hosaflook Reeder. On April... View Obituary & Service Information

The family of Rex Nelson Reeder created this Life Tributes page to make it easy to share your memories.

Send flowers to the Reeder family.