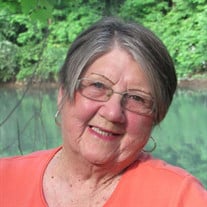 Patricia Lee “Patty” Bull Adams, age 79, of Buckhannon, died Friday, September 24, 2021, at the J.W. Ruby Memorial Hospital in Morgantown. She was born at home on July 29, 1942, in Walkersville, WV, a daughter of the late Opha and Susie Jane Alkire Bull. On August 12, 1978, she was united in marriage to Ronald Gale Adams, who preceded her in death on December 8, 2010. In addition to her parents and husband, she was also preceded in death by one son Michael L. Bull, a brother-in-law John N. Fetty, Sr., and a nephew James N. “Jimmy” Fetty. She is survived by one daughter Heather and husband Keith “Skeeter” Queen of Buckhannon; grandchildren: Haley Marie and husband Kyle LeBarron of Charleston, Dakota Michael Bull of Charlotte, North Carolina, Gillian Lee Adams and Caleb Butcher of Buckhannon and Gaidian Lee Adams of Buckhannon; siblings: Margaret Fetty of Buckhannon and Dr. James O. Bull and wife Janie of Florida; nieces: Annette Fetty Santilli and husband Sam of Philippi, Kristin Bull of Texas, and great niece Stephanie Santilli of Philippi; nephews: Justin Bull and wife Corrine of Weirton, John Fetty, Jr. and wife Karen of Grafton, and great nephews J.T. Fetty and wife Hannah of Grafton, Tyler Fetty of Grafton, and Issac Fetty of Buckhannon; and extended family: Brenda & Joey Bonnett of Clarksburg, Amy and Luke Daly of Florida, Robin Marsh, Linda DeBarr, Barbara Woodford, Beverly Reed, Shirley Linger, Terry Miller, Kenny Himes, and Vernon Bennett, all of Buckhannon. Patty served the Republican Party in Upshur County, West Virginia, and the USA faithfully in countless capacities, but most notably as: Chairman of the Upshur County Republican Executive Committee, Member of the West Virginia State Republican Executive Committee, Member of the Federation of Republican Women, as well as years of involvement with the Teenage Republicans, including helping form their chapter in Upshur County. In addition, she attended Republican National Conventions all over the country, state Republican meetings, organized events for political candidates, contacted poll workers for the Republican Party for the election process, served as Ballot Commissioner and ensured voters were able to vote by delivering absentee ballots to those in the hospital or sick at their residence, held picnics for political gatherings, hosted Lincoln Day Dinners, and visited other counties within in WV for their dinners as well. She loved politics, she loved the Grand Old Party (GOP), and she loved the U.S.A. Her social involvement did not stop with politics, as she spent 60-plus years as a member of the Shamrock CEOS Club in Ireland, West Virginia where she held many offices and especially enjoyed the fellowship of the luncheons and being the lesson leader and serving refreshments. For many years, she made the scrapbook of the year-long events for the club to be entered into the state competition. She was also a lifetime member of St. Joseph’s Hospital Auxiliary, a member of the Order of the Eastern Star and the International Order of the Rainbow for Girls. She loved working the kitchen at the Ireland Community Building for the Irish Spring Festival and having a booth with her husband when the festival first began. She also enjoyed working the Country Kitchen for the Jubilee in Jane Lew. In addition to her labors of love as a homemaker, she also had worked at the Garden Fresh in Weston, the State Road in Weston, the WV Glass factory in Weston as a hand painter, and under the Arch Moore Administration, she opened the first ABC store in Upshur County. The remainder of her life she spent providing care to elderly and sick family members while raising a family of her own. In more recent years, she enjoyed attending Horizons Church and the fellowship of Pastor Dave Cunningham. Her life was one of devotion to her family—especially her grandchildren, and to others through the unselfish giving of her time in service work and politics. The family will receive friends on Thursday, September 30, 2021, from 3-8:00 PM, at the Heavner & Cutright Funeral Chapel. Private funeral services will be held for the family, but friends may attend a graveside service on Friday, October 1, 2021, at 1:30 PM, at the Forest Lawn Memorial Gardens, Lewis County, where Pastor Dave Cunningham will officiate.

The family of Patricia Lee Adams created this Life Tributes page to make it easy to share your memories.

Send flowers to the Adams family.