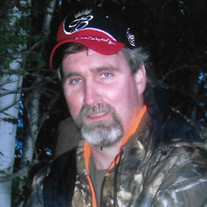 Owen Mark Jones, age 51, of Pickens, died Friday, August 25, 2017. He was born on November 28, 1965, in Buckhannon, a son of the late Herb Willis and Lulu Belle Tharp Jones. On December 23, 1988, he was united in marriage to Betty “BJ” Kennedy Jones, who survives. Also surviving are two sons: Codey Jones and wife Ciera of Pickens and Kaleb Jones and wife Shelby of French Creek; five grandchildren: Bentley, Addison, Elaina, Barrett, and Clinton Jones; two sisters: Christine Tharp Crider and husband Don of Missouri and Lois Jones of Buckhannon; two brothers: Shawn Jones of Pickens and Lyndon Jones and wife Carry of Hacker Valley; and five nieces and nephews: Quentin Metzner, Rachel Jones, Jacob Jones, Katelyn Jones, and Sarah Jones. In addition to his parents, he was also preceded in death by one brother, Jesse Jones. Owen was a Baptist by faith and was an avid hunter and fisherman. He enjoyed camping, cooking out in the woods, riding in his side-by-side, and pitching horseshoes; and he dearly loved spending time with his grandkids. The family will receive friends at the Heavner and Cutright Funeral Chapel on Thursday, August 31, 2017, from 9:00 AM-2:00 PM, the funeral hour, with Pastor Don Butcher officiating. Interment will follow in the Pickens Cemetery.

The family of Owen Mark Jones created this Life Tributes page to make it easy to share your memories.

Send flowers to the Jones family.