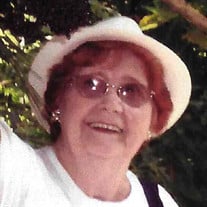 Opal “Red” Virginia Carpenter Page, age 94, passed away on Thursday, November 3, 2016, surrounded by family, at the home of her eldest son. She was born at Carter, WV on September 21, 1922, a daughter of the late Roy and Ella Hunt Carpenter. On August 16, 1941, she was united in marriage to Cecil A. Page, who preceded her in death on August 4, 2001. She is survived by three children: Richard Page and wife Zelma, Gloria Helmick, and Melvin Page and wife Amanda, all of Buckhannon; seven grandchildren: Carla “Joni” and husband John Hinchman of Buckhannon, Richard Page, II and wife Sheri of Buckhannon, Roger Tenney of Orlando, FL, Craig and Scott Helmick, and Sheldon and Shea Page, all of Buckhannon; three great grandchildren: Holly and husband Travis Anderson of Buckhannon, Shane Reed of Slippery Rock, PA, and Nick Page of Buckhannon; three great great grandchildren: Lucas and Emmett Anderson of Buckhannon and Jaxon Reed of Butler, PA; two brothers: Hugh Carpenter of Ohio and Hub Carpenter of North Carolina; one sister Dama Jean Stockard of Taylor County, WV; and several nieces and nephews. In addition to her parents and husband, she was also preceded in death by three brothers: Olen, Doyle, and Willard Carpenter; and one sister Avis. Mrs. Page worked in many different jobs during her lifetime including: general store owner, cook, waitress, and head laundress at Leonard Memorial Hospital until she retired to her family-owned farm. The family will receive friends on Saturday, November 5, 2016, from 4-8:00 PM, at the Heavner and Cutright Funeral Chapel. The funeral will be held on Sunday, November 6, 2016, at 2:00 PM, at the funeral chapel, with the Rev. Robert F. Heavner officiating. Interment will follow in the Center Chapel Cemetery.

The family of Opal "Red" Virginia Carpenter Page created this Life Tributes page to make it easy to share your memories.