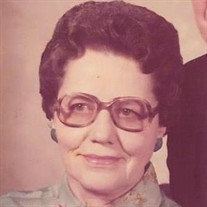 Ona Dot Thomas Phillips, age 100, formerly of the Tennerton Community, died Wednesday, March 2, 2016, at Holbrook Nursing Home in Buckhannon. She was born on September 21, 1915, near Alton, WV, a daughter of the late Hugh and Anna Pfister Thomas. On March 15, 1942, she was united in marriage to Willis Gerald Phillips, who preceded her in death. In addition to her parents and husband, she was preceded in death by three brothers: Loy, Everett, and Don Thomas; three sisters: Virgie Phillips, Gertie Bailey, and Pearl Simmons; and two sisters-in-law: Garnetta Thomas and Madeline Thomas. She is survived by three nephews: Robin Simmons, Charles Thomas, and Danny Thomas; and several great and great-great nieces and nephews, including special family: great nephew B.J. Thomas, Carrie Thomas, and Levi and Lexi Thomas. Mrs. Phillips attended the Phillips one-room school for eight years and was graduated from Upshur County High School in 1933. She then attended West Virginia Wesleyan College, where she received her B.A. degree in 1941. In 1955, she received a M.A. degree from West Virginia University. She taught elementary school for 38 years, spanning from 1935-1973, and was a member of the Upshur County Association of Retired School Employees. She was a charter member of the Kappa Chapter of Alpha Delta Kappa, life member of the Emeritus Club of West Virginia Wesleyan College, and a life member of the West Virginia University Alumni Association. She was a Methodist by faith and had been a member of the Indian Camp United Methodist Church since 1934. Friends will be received at the Heavner and Cutright Funeral Chapel on Friday, March 4, 2016, from 10:00-11:00 AM, the funeral hour, with the Rev. Sue Lowther and Rev. Etheldean Yanero officiating. Interment will follow in the Indian Camp Cemetery.

The family of Ona Dot Thomas Phillips created this Life Tributes page to make it easy to share your memories.