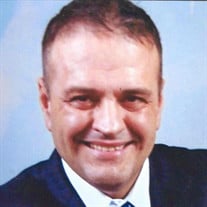 Michael George Shaffer, age 48, of Buckhannon, died on Thursday, July 22, 2021, after an extended illness. He was born on October 29, 1972, the only child of the late George “Buck” Shaffer and Linda Kay Dennison Shaffer who survives in Buckhannon. In addition to his mother, he is survived by twin children: Logan Michael and Autumn Nichol Shaffer; half-sisters: Victoria J. White, Mary J. White, and Christine and husband Brian Hull; nephew Zach Hull; and many aunts, uncles, and cousins. In addition to his father, he was preceded in death by his paternal grandparents, Gordon and Lena “Mary” Shaffer; maternal grandparents, Minter E. and Mary Katherine Courtney-Dennison; sister, Virginia “Jenny” Jones; and nephew, Bobby Jo Hannifan. Mike served his country in the Army National Guard. He worked as a Fiber Optic Technician for Lucent Technologies, a System/Network Administrator for Agilent Technologies, Computer Engineer at Hewlett-Packard, Network Administrator for NeuMedia Inc., Manager of Printing and Publishing Operations at Snowshoe, a landscaper, and a pizza delivery driver. At one time Mike operated a casino and sponsored UFC fights and owned his own business, Connected Networks. He also taught ski lessons and was a member of the ski patrol unit. Mike loved to smoke food for his family and friends as well as churches and various organizations. He loved to ride bikes, motorcycles, and snowmobiles, especially with his buddies. He was an avid RC car collector. He also loved to fly drones, build models and robotics, and create items with his 3D Printer. Mike was generous with his time and money and had an adventurous spirit and a loving nature. He will be greatly missed. Mike’s wishes were to be cremated and his cremated remains will be interred at a later date at the Heavner Cemetery. A memorial service will be held at a later date for family and friends.

The family of Michael George Shaffer created this Life Tributes page to make it easy to share your memories.

Send flowers to the Shaffer family.