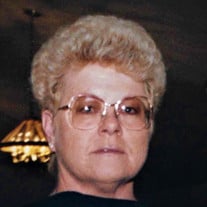 Mary Louise Williams, age 75, of Adrian, died Friday, September 24, 2021, at St. Joseph’s Hospital in Buckhannon. She was born on January 16, 1946, in Upshur County, a daughter of the late Archibal Floyd and Macel Lorraine Barker Perrine. On May 30, 1964, she was united in marriage to Robert Lee (Bob) Williams who preceded her in death on March 27, 2019. In addition to her parents and her husband, she was also preceded in death by one daughter Tammy K. Williams; one sister Bessie; and two brothers: Johnny and Joe Perrine. She is survived by two daughters: Kimberly Ann Hinchman and significant other Mike of Adrian and Cindy Louise Pugh and Jeff Brown of French Creek; two sons: Robert Lee Williams, Jr. of Alexander and Dusty Lee Williams and Kim Champ of Adrian; five grandchildren: Matthew, Ashley, Natasha, Shawn II, and Morgan; eleven great grandchildren: Payton, Aubrey, Kylee, Gage, Dustin, Gavin, Remington, Easton, Shawn III, Brogan, and Sweelo; two sisters: Helen Bentley and Joyce and husband John Griffith; six brothers: James, Billy, Harold and wife Sherry, David and wife Linda, Donald, and Jackie and wife Patty; and numerous nieces and nephews. Mary was a Christian by faith and a member of the Tom Anderson Mission Center in Adrian. She loved being with her children and grandchildren, reading her Bible, and going to church. Each of her brothers and sisters were very special to her and she loved them dearly, knowing she could always count on them. The family will receive friends at the Heavner & Cutright Funeral Chapel on Monday, September 27, 2021, from 12-2:00 PM. A private funeral will be held for the family with Pastor Randall Hughes officiating. Following the services, the body will be cremated according to the wishes of the deceased.

The family of Mary Louise Williams created this Life Tributes page to make it easy to share your memories.

Send flowers to the Williams family.