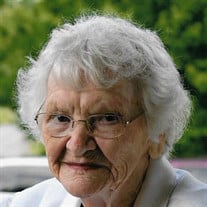 Mary Arlene Woody Woodson Lee, age 93, of French Creek, passed away peacefully at her home on Thursday, February 11, 2016. She was born on October 3, 1922, at Holly Grove in Upshur County, a daughter of the late Dorsie Albert and Della May Hanline Woody. She was united in marriage in June 1940, to Mirl Elmer Woodson, who preceded her in death in August 1970, and together they had eight children. Surviving are four daughters: Deloris and husband Edgar Bryant of French Creek, Wanda and husband Dale Hawkins of French Creek, Carla Harper of Buckhannon, and Tammy and husband Mike Ford of Salem, WV; three sons: Gene and wife Christa Woodson of Sanford, NC, Jerry Woodson of Sanford, NC, and Albert and wife Opal Woodson of Selbyville; twenty-two grandchildren; twenty-two great grandchildren; several great great grandchildren; four stepchildren; one brother Carl and wife Thelma Woody of Selbyville; many nieces and nephews; and countless friends. Arlene married Gerald “Mutt” Lee in October 1986 and he preceded her in death in August 1988. In addition to her father and mother and her first and second husbands, she was preceded in death by one son Elmer Woodson; son-in-law Bryan Harper; four sisters: Mabel Hinkle, Edith McDaniels, Lorene O’Dean, and Alice Hawthorne; and three brothers: Howard, George and Dorsie “Junior” Woody. As a girl, Arlene worked as a cook in many logging camps in the area where her father also worked. She was also a caregiver for many sick and elderly people in Upshur and Randolph counties. Arlene was a very special, talented, creative woman who did things her own way and enjoyed making rugs, quilting, crocheting, and writing and singing songs of faith. She was known as an excellent baker of her famous Ammonia Cookies and “Hacked” Apple Pie. She faithfully attended the Kanawha Run United Methodist Church. Arlene’s request for cremation has been honored by her family. A memorial service will be held on Saturday, February 20, 2016, at the Heavner & Cutright Funeral Chapel, where the family will receive friends from 12:00 Noon to 2:00 PM, the service hour, with Rev. Kara Philippi, Kevin Cutright, and Pastor Ed Lowther officiating. A private interment will be held at a later date. In lieu of flowers, please make donations to the Kanawha Run United Methodist Church at 3686 Alexander Road, French Creek, WV 26218 or the Upshur Cooperative Parish House at 68 College Avenue, Buckhannon, WV 26201.

Mary Arlene Woody Woodson Lee, age 93, of French Creek, passed away peacefully at her home on Thursday, February 11, 2016. She was born on October 3, 1922, at Holly Grove in Upshur County, a daughter of the late Dorsie Albert and Della May... View Obituary & Service Information

The family of Mary Arlene Woody Woodson Lee created this Life Tributes page to make it easy to share your memories.

Send flowers to the Lee family.