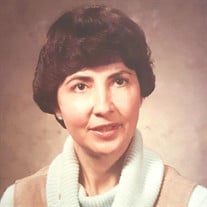 Mary Henderson, age 80, of Buckhannon, died Friday, August 7, 2015, at St. Joseph’s Hospital in Buckhannon. She was born near Audra, Barbour County, WV, on May 5, 1935, a daughter of the late Odes and Elsie Zirkle Campbell. On August 21, 1952, she was united in marriage to Donald Henderson, who survives. Also surviving is one son Don Henderson, Jr. of Buckhannon; one daughter Debbie DeGroff and husband Rick of Montrose; four grandchildren: Rick DeGroff and wife Sarah of Eleanor, Jon DeGroff and wife Candi of Eleanor, Joe DeGroff and wife Amber of Buckhannon, and Ashley Gill and husband Jonathan of Charleston; twelve great grandchildren: Emily, Grace, James, Matthew, Kate, Henry, Patrick, and Olivia DeGroff of Eleanor, Joey, Leah, and Joshua DeGroff of Buckhannon, and Thomas Gill of Charleston. In addition to her parents, she was preceded in death by two brothers: Herman and Thomas Jones and two sisters: Jean Murphy and Sheila Jones. Mary was co-owner of Henderson’s Mobile Homes and Henderson Supply. She was a member of the Christian Fellowship Church, and formerly a member of Chapel Hill United Methodist Church, where she served on the Administrative Board, as the first woman trustee, and was an active member of the United Methodist Women. She had been a charter member and trustee of the Upshur County Cooperative Parish, and a member, officer, group leader, or volunteer in many community organizations including: Friends of the Library, Junior Woman’s Club, Jaycee-ettes, Boy Scouts, Girl Scouts, and Meals on Wheels. In 1970, she was honored with being listed in the edition of “Outstanding Young Women of America” for accomplishments and service to the community. Mary, in her youth, attended Campbell School (one-room) near Audra. She also attended Buckhannon-Upshur High School, West Virginia Wesleyan College, and was a graduate of the University of Hard Knocks at Alderson-Broaddus College. The family will receive friends on Monday, August 10, 2015, from 4-8:00 PM, at the Heavner and Cutright Funeral Chapel. The funeral will be held on Tuesday, August 11, 2015, at 10:00 AM, at the funeral chapel, with the Rev. J. Edward McDaniels and the Rev. Dr. Marvin Carr, III officiating. Interment will follow in the Upshur County Memorial Park.

Mary Henderson, age 80, of Buckhannon, died Friday, August 7, 2015, at St. Joseph&#8217;s Hospital in Buckhannon. She was born near Audra, Barbour County, WV, on May 5, 1935, a daughter of the late Odes and Elsie Zirkle Campbell. On August... View Obituary & Service Information

The family of Mary Henderson created this Life Tributes page to make it easy to share your memories.

Send flowers to the Henderson family.