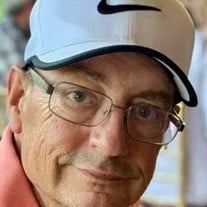 Mark Flint Riggs, age 64, of French Creek, died on Sunday, January 26, 2020, at United Hospital Center in Bridgeport. He was born on February 15, 1955, in Upshur County a son of the late Dale Flint and Carolyn Rosalie Lantz Riggs. He was united in marriage on July 27, 2002, to Margaret Ann Riggs, who preceded him in death on February 3, 2017. In addition to his parents and his wife, he was also preceded in death by one sister Susan Arey. He is survived by two daughters: Vanessa Heavner and fiancé Lawrence Lance of Buckhannon and Lindsey Riggs of Buckhannon; two sons: Travis Riggs and Justin Riggs, both of Buckhannon; ten grandchildren: Alyssa, Caleb, Colin, Izabella, Graeson, Matthew, Palmer, Lillyana, Rilea, and Nova; two great grandchildren: Emmit and Quinton; one brother Gregory Dale Riggs of Buckhannon; and two sisters: Robyn Riggs of Buckhannon and Janie and husband Derek Younkman of Ohio; and several nieces and nephews. Mark was a graduate of Buckhannon-Upshur High School. He was a member of the Buckhannon Moose Lodge #598, the BPOE 1736, and the WV Mountaineer Club, which his dad organized and started. He was a member of the Southern Upshur Business Association (SUBA), where he and his former wife Margaret shared the 2015 Citizen of the Year Award. He was an avid WV sports fan and WV Mountaineer Athletic Supporter. For many years Mark donated new dictionaries to the Rock Cave Elementary School as well as supported the French Creek Elementary School Backpack Program. He was also a sponsor of the Redneck Rollers Bowling Team. For the past two years, Mark had operated the Wildlife Gift Shop at the WV Wildlife Center. Mark was a Christian by faith and had attended the Chapel Hill United Methodist Church as well as the Christian Fellowship Church. Friends will be received at the Heavner & Cutright Funeral Chapel on Wednesday, January 29, 2020, from 4-8:00 PM. Funeral services will be held on Thursday, January 30, 2019, at 11:00 AM at the funeral chapel with Pastor J. Edward McDaniels officiating. Following funeral services, the family is honoring Mark’s wishes for cremation and private burial will be at a later date in the French Creek Memorial Gardens.

Mark Flint Riggs, age 64, of French Creek, died on Sunday, January 26, 2020, at United Hospital Center in Bridgeport. He was born on February 15, 1955, in Upshur County a son of the late Dale Flint and Carolyn Rosalie Lantz Riggs. He was united... View Obituary & Service Information

The family of Mark Flint Riggs created this Life Tributes page to make it easy to share your memories.

Send flowers to the Riggs family.