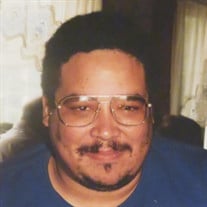 Mark Paul Griffin, age 57, died Friday, January 15, 2021, at the Holbrook Healthcare Center, where he had been a resident since March 2008. He was born on December 24, 1963, in Beckley, WV, a son of the Rev. Mitchell L. Griffin, III, who survives at French Creek with wife Judy, and the late Patricia Ann Webb. Also preceding him in death was his stepmother, Mary Ann Griffin. In addition to his father, he is also survived by one daughter TaNeka Williamson of Milford, IA. Mark was previously employed as a truck driver. He was a member of the Mt. Olive United Methodist Church at Hemlock and the Adrian VFD. He enjoyed taking walks and going for drives. At the request of the deceased, his body will be cremated. A memorial service will be held on Saturday, April 10, 2021, at 12:00 PM, at the Mt. Olive Cemetery at Hemlock. In lieu of flowers, contributions in memory of Mark may be made to the Mt. Olive United Methodist Church, 1352 Palace Valley Road, Helvetia, WV 26224.

The family of Mark Paul Griffin created this Life Tributes page to make it easy to share your memories.

Send flowers to the Griffin family.