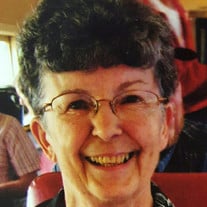 Marjorie Ann Heckert, age 82, formerly of Buckhannon, passed from this life to be with the Lord at 2:30 PM, Monday, April 18, 2016, at the family’s residence in Clarksburg WV. She was born on February 24, 1934, the only daughter of the late Catherine Palmer Wilson of Akron, Ohio. In addition to her mother, she was preceded in death by her first husband Walter Murphy and second husband Charles Heckert. Left to cherish her memory are one stepson Mike Heckert and wife Melanie and two granddaughters Lyndsey and Jordan of Clarksburg; two stepdaughters: Annette Laplante and husband Richard and Charlene LeClair and husband Norm and children. Surviving family from Iowa include two grandsons: Chad Heckert and wife Sarah and their children Haylee, Hannah, and Hunter, and Clay Heckert; one granddaughter Celeste Bathhurst and husband Kenny and their children Holly and Calla. Marjorie spoke about many happy times visiting her maternal grandparents on their farm in Virginia. After graduating high school in Ohio, she worked several years for a local lawyer. A highlight of the job was traveling to Florida and California with her boss's wife and mother for vacations. She married Walter Murphy, a building contractor, and moved to Buckhannon to build homes. Walter later passed away from cancer and after his passing, she began working for the Central WV Aging Services, where she remained until her retirement in 2013. In 1982, she was united in marriage to Charles Heckert; they celebrated 33 years of marriage until his death in December 2014. Marjorie enjoyed attending the First Presbyterian Church of Buckhannon, gardening, wood burning, cooking, feeding birds, traveling, and caring for her many pets. She loved her family dearly. Sadly, Marjorie suffered a stroke in 2013, which forced her to retire from her job with the Central WV Aging Services. While she recovered partially, she was unable to pursue the hobbies she loved so dearly. The family would like to thank Renae, Lisa, Stephanie, and Jen of the WV Hospice of Buckhannon for their love and excellent care. These ladies were a true blessing and a bright spot to our day anytime we saw them at our door. At her request, Marjorie was cremated. A Graveside Service will be held at 2:30 PM, on Thursday, April 28, 2016, at the Lorentz United Methodist Church Cemetery. A memorial gathering will also be held on Thursday, April 28, 2016, from 4-6:00 PM at the First Presbyterian Church of Buckhannon, 13 South Locust Street, Buckhannon, WV. In lieu of flowers, memorials may be sent to the Humane Society of Harrison County, PO Box 4397 Clarksburg, WV 26302, 304-592-1600, or http://www.hshcwv.org/.

The family of Marjorie Ann Heckert created this Life Tributes page to make it easy to share your memories.

Send flowers to the Heckert family.