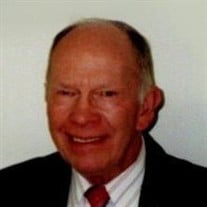 Manzel Clyde Brooks, age 95, of the Lick Run Community, died Wednesday, August 14, 2019, at his home. He was born on November 11, 1923, in Webster County, a son of the late James Isaac and Alice McCourt Brooks. On October 24, 1947, he was united in marriage to Lucille V. Boggs Brooks, who survives. Also surviving are three sons: James C. Brooks of Clarksburg, John E. Brooks and wife Pat of Goldvein, VA, and Robert Wayne Brooks of Weston; four grandchildren: Jeffrey, Jamie, Joseph and wife Amy, and Samantha; three great grandchildren: Miranda, Abigail, and Kylie; and one niece Linda Zickefoose. In addition to his parents, he was also preceded in death by two sisters: Ethyl Brooks and Edith Miller; and one niece Karen Miller. Mr. Brooks was a veteran of the US Army, having served during WWII throughout the European Theater and as a part of an anti-aircraft unit during the Battle of the Bulge. He was a member of the French Creek United Methodist Church. He enjoyed woodworking and fishing, and was a retired electrician. The family will receive friends on Friday, August 16, 2019, from 10-11:00 AM—the funeral hour, at the Heavner and Cutright Funeral Chapel. Interment will follow in the French Creek Presbyterian Cemetery.

The family of Manzel Clyde Brooks created this Life Tributes page to make it easy to share your memories.

Send flowers to the Brooks family.