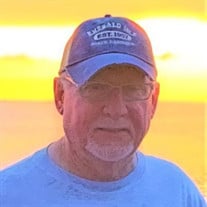 M. Keith “Skeeter” Queen, age 66, of Buckhannon, died Monday, February 28, 2022, at the St. Joseph’s Hospital in Buckhannon, surrounded by his girls. He was born on June 9, 1955, in Clewston, Florida, a son of the late Clarence Keith and Patricia Ann Schmid Queen. In addition to his parents, he was also preceded in death by his first wife, Patty Marino Queen and his father- and mother-in-law Ronald and Patty Adams. He is survived by his wife Heather Adams Queen; one son Roger S. Queen of Beckley; two daughters: Gillian Lee Adams and Gaidan Lee Adams, both of Buckhannon; one brother Mark S. Queen and wife Charlotte of Beckley; and one sister Lisa and husband Charles “Buster” Marino of Georgetown, OH.; exchange student, Dmitriy Ormeno of Chile. Skeeter was a graduate of Buckhannon-Upshur High School, Class of 1973. From 1974-1988, he was employed by Upshur Coals, Lang Brother Coal Company, and Bethlehem Steel. In 1986, he opened his own windshield repair business, and added another business, Upshur Vending in 1988. From 1990-2010, he was employed by the Upshur County Emergency Squad as a Paramedic. Following those 20 years with the EMS, he was employed by St. Joseph’s Hospital as a Lab Technician and manager of their medical equipment division. In 2013, he returned to work as a paramedic, serving in both Upshur, and later, Lewis and Braxton Counties. His civic involvement included work as a volunteer fireman with the Buckhannon Fire Department (1975-2006), City Councilman (2000-2012); and County Medical Examiner (2000-2014). He loved spending time with his family and his girls, the family’s eight dogs, travelling, and working puzzles. The family will receive friends on Thursday, March 3, 2022, from 4-7:00 PM, at the Heavner & Cutright Funeral Chapel. The funeral will be held on Friday, March 4, 2022, at 1:00 PM, at the funeral chapel with Pastor Dave Cunningham officiating. Interment will follow in the Forest Lawn Cemetery at Jane Lew.

The family of M. Keith "Skeeter" Queen created this Life Tributes page to make it easy to share your memories.

Send flowers to the Queen family.