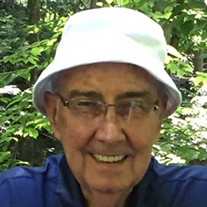 Lynn Rexroad, age 78, of Tallmansville, died Friday, May 25, 2018, at his home. He was born December 1, 1939, in Lewis County, a son of the late Harry F. and Roxie King Rexroad. He was united in marriage on July 7, 1960, to Dottie Sines Rexroad, who survives. In addition to his wife, he is also survived by one daughter Gina Ball and husband Rick of Tallmansville; two sons: Rick Rexroad and companion Laura Ryder of Ravenswood, WV and Chad and wife Chrissy Rexroad of Tallmansville; ten grandchildren; and eight great grandchildren. In addition to his parents, he was also preceded in death by one son Neal Rexroad, two infant grandchildren, and two brothers: Bob and Jack Rexroad. Lynn played gospel music with the group, Wireless Connection, and enjoyed playing at the Senior Center and for local nursing homes. He was a member of the Tallmansville Baptist Church. At the request of the deceased, the body was cremated. Graveside memorial services will be held for Lynn and his son Neal on Sunday, June 3, 2018, at 2:00 PM, at the Heaston Ridge Cemetery, with the Rev. Wease Day, Pastor Greg Miller; and Pastor Tim Lewis officiating. In lieu of flowers, donations may be made to Peoples Hospice at 3 Hospital Plaza, Clarksburg, WV 26301.

The family of Lynn Rexroad created this Life Tributes page to make it easy to share your memories.

Send flowers to the Rexroad family.