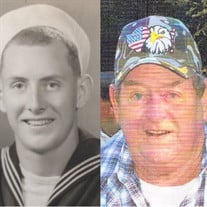 Kermit Dale Long, age 81, of the Salem Ridge Road, died Saturday, May 14, 2016, at his home. He was born on May 3, 1935, at Gaines, a son of the late Joe A. and Ruth Hamner Long. He is survived by his wife Jean Haddix Long of Salem Ridge; one daughter Jeanne Phillips of Salem Ridge; three sons: Dave Long, John Long, and Kermit Dale Long, II, all of Salem Ridge; three grandchildren: Dale Gene Powers and wife Erica, Jenna Phillips, and Michael Long and companion Gina Jenkins; six great grandchildren: Maysie, Christian, and Colton Long, Brooklyn and Drake Bryant, and Journey Phillips; three sisters: Barbara Ferren of Shinnston, Rita and husband Carl Watson of Walkersville, and Caroline Long of Buckhannon; and two brothers: Basil Long of Gaines and Donald Long and wife Martha of Arlington. Special caregiver Francis Chidester also survives. In addition to his parents, he was preceded in death by one son Keith Long; one grandson Kermit Dale Long, III; two sisters: Ellen Jean Bennett and Martha Leuszler; and five brothers: Andrew Dixon Long, Burl Long, Davis Ross Long, Tom Joe Long, and John Allen Long. Mr. Long was a veteran of the U.S. Navy having served on the aircraft carrier, the USS Forrestal, was a recipient of the Good Conduct Medal, and was later a member of the VFW. He was the owner and operator of KD Long Construction for many years and was an avid hunter along with all his hunting buddies. The family will receive friends on Wednesday, May 18, 2016, from 4-8:00 PM, at the Heavner and Cutright Funeral Chapel. The body will lie in state at the Salem Ridge United Methodist Church on Thursday, May 19, 2016, from 1-2:00 PM, the funeral hour, with Pastor David Jessie and the Rev. Robert F. Heavner officiating. Interment will follow in the Salem Ridge Cemetery, where the Upshur County Honor Guard will conduct military honors. In lieu of flowers, the family suggests donations be made to the Salem Ridge Cemetery or to purchase a fruit tree to be planted in Mr. Long’s memory.

The family of Kermit Dale Long created this Life Tributes page to make it easy to share your memories.

Send flowers to the Long family.