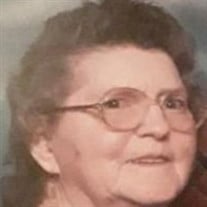 Katherine “Elena” Huffman Shaw, age 82, of Selbyville, died on Thursday, March 5, 2020, at the Elkins Rehabilitation and Care Center. She was born in Upshur County on April 11, 1937, a daughter of the late Denzil F. and Reta Reger Huffman. In addition to her parents, she was preceded in death by her father- and mother-in-law, Anderson and Goldie Shaw; two sons: Darrell Bennett and Loren Huffman; two brothers: Everett Dale Huffman and Delbert Huffman; and one sister Verna Fay Shaw. She was united in marriage on July 6, 1965, to Clifton Shaw who survives. In addition to her husband, she is survived by one daughter Karen Collins and husband Orville of Selbyville; daughter-in-law Roberta Huffman of Newlonton; grandchildren: Loren (Bub) Huffman, Misty Huffman, Brenda Woodson, Junior Collins, and Mitchell Collins; great grandchildren: Josh, Madison, and Easton Huffman, Dylon Casto, Autumn Woodson, Leah, Krista and Wyatt Collins, and Brooklyn Collins; and grandchildren and great grandchildren that she took under her wings: Joyce Armentrout and family and Edward Ware and family. She is also survived by several brothers- and sisters-in-law, nieces, and nephews. Elena was a lifetime member of the Selbyville Volunteer Fire Department and was a member of the Pleasant Dale Community Church at Selbyville. Friends will be received at the Heavner and Cutright Funeral Chapel on Monday, March 9, 2020, from 11:00 AM-12:00 Noon—the funeral hour with Rev. Clifford Shaw officiating. Interment will follow in the Pleasant Dale Cemetery at Selbyville. In lieu of flowers, donations may be made to help the family with funeral expenses.

The family of Katherine "Elena" Shaw created this Life Tributes page to make it easy to share your memories.

Send flowers to the Shaw family.