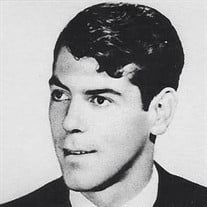 Junior Lee Cobb, age 69, of French Creek, died Tuesday, November 1, 2016, at St. Joseph’s Hospital in Buckhannon. He was born March 24, 1947, in Upshur County, a son of the late Lawrence and Bertha Collins Cobb. He was united in marriage on June 9, 1972, to Karen J. Osburn Cobb, who survives. In addition to his wife, he is survived by one son Andrew Cobb and one daughter Tara Cobb both of French Creek; four grandchildren: Mason and Spencer Cobb, both of Buckhannon, Aleah Detamore and Lana Cobb both of French Creek; six brothers: Pete, Jim, and Denny Cobb, all of Buckhannon, Roy Cobb of French Creek, and Ralph and Marvin Cobb, both of Weston; and one sister Linda Ball of Buckhannon. He is also survived by his special dog, Miles, who kept him company. He was preceded in death by one sister Martha Riffle and one brother Okey Cobb. Mr. Cobb was a 1968 graduate of Lewis County High School. He was formerly employed at Moore Business Forms and was the former owner of JR’s Carpet Center. Attending car shows was a favorite activity of his. He was a veteran of the United States Army having served in Vietnam and he attended the Light Chapel Church. Friends will be received at the Heavner and Cutright Funeral Chapel on Monday, November 7, 2016, from 5-6:00 PM, at which time a memorial service will be held with Rev. Brandon Kelley officiating. The Upshur County Honor Guard will conduct military honors. The family will have a private interment service at a later date.

Junior Lee Cobb, age 69, of French Creek, died Tuesday, November 1, 2016, at St. Joseph&#8217;s Hospital in Buckhannon. He was born March 24, 1947, in Upshur County, a son of the late Lawrence and Bertha Collins Cobb. He was united in marriage... View Obituary & Service Information

The family of Junior Lee Cobb created this Life Tributes page to make it easy to share your memories.

Send flowers to the Cobb family.