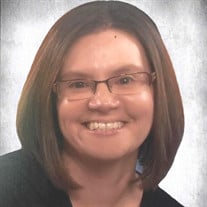 Judy Lynn Davis, age 42, of Volga, died Friday, August 4, 2017, at her home. She was born on June 29, 1975, a daughter of the late Robert Roscoe Godfrey and Gladys Harriet Simons Godfrey Rutherford and stepfather Clarence “Pete” Rutherford, who survive. On August 25, 2001, she was united in marriage to Joshua Paul Davis who survives. Also surviving are two children: Cody Paul Davis and Morgan Alexandria Davis, both of the home; four sisters: Bonnie and husband Randy Ours of Buckhannon, Connie and husband Butch Reese of Buckhannon, Kristie Zink of Philippi, and Lisa and husband Alan Tenney of Buckhannon; four brothers: Robert Godfrey, Jr. and wife Marguin of French Creek, Steve Godfrey and wife Susie of Tunnelton, WV, Ronald Godfrey and wife Amanda of Anmoore, WV, and Greg Godfrey and wife Jackie of Morgantown; two step sisters: Melody and husband Dave Malcomb of Buckhannon and Beth Rutherford of Buckhannon; one step brother Carl Rutherford of Buckhannon; and several nieces and nephews. Judy attended the Cornerstone Community Church and loved to read, spend time with family, and cheer for the Philadelphia Eagles and the WVU Mountaineers. The family will receive friends on Sunday, August 6, 2017, from 5-8:00 PM, at the Heavner and Cutright Funeral Chapel. The funeral will be held on Monday, August 7, 2017, at 11:00 AM, at the funeral chapel, with Pastor John Darnall officiating. Interment will follow in the Pickens Cemetery.

The family of Judy Lynn Davis created this Life Tributes page to make it easy to share your memories.

Send flowers to the Davis family.