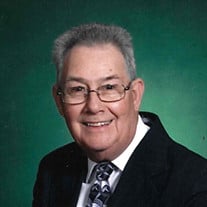 John E. Wines (80), of Buckhannon, went to be with our Lord and Savior on Wednesday, December 26, 2018, at CAMC Memorial Hospital in Charleston after a progressive illness. He was born June 16, 1938, in Lewis County. John is survived by his wife of 54 years, Beulah Madge Wines, and one son Robert Wines, along with a special like-son, Bryan Luzader. John was survived by one brother Verdine (Ruby) Wine of Youngstown, OH, and Mary Geyer of Wellman, IA. John was preceded in death by his parents, John L. Wine and Violet (Hinkle) Wine of Orlando, WV. In addition to his parents he was preceded in death by several brothers and sisters: Hoy Wine (Mary) of Boardman, OH, Doyle Wine of Orlando, WV, Jerry Wines (Bobbi) of Washington, DC, Arlene (Gene) Conrad of Orlando, WV, Geraldine (Bill) Brown of PA, and Emogene (Bernard) Blake of Burnsville, WV. John graduated from Burnsville High School in 1956, and then went on to proudly serve his country from 1959-1962, in the US Army, and was later a member of the American Legion Post #7 of Buckhannon. He was employed as a lead press operator as Moore Business Forms in Buckhannon for 31 years, retiring in 1995. He then shared his talents with the State Division of Natural Resources as a Wildlife Aide at the State Wildlife Center in French Creek, retiring there in 2010. John was very active in his church (Buckhannon Union Mission) where he loved to sing and play his guitar. John was a very kind man and always wanted to help others. Friends will be received at the Heavner and Cutright Funeral Chapel on Saturday, December 29, 2018 from 5-8:00 PM. The funeral will be held on Sunday, December 30, 2018, at 2:00 PM, at the funeral chapel, with Rev. Dennis Estes and Rev. Ronzel Roberts officiating. Interment will follow in the Upshur County Memorial Park, where the Upshur County Honor Guard will perform military honors.

John E. Wines (80), of Buckhannon, went to be with our Lord and Savior on Wednesday, December 26, 2018, at CAMC Memorial Hospital in Charleston after a progressive illness. He was born June 16, 1938, in Lewis County. John is survived by his... View Obituary & Service Information

The family of John E. Wines created this Life Tributes page to make it easy to share your memories.

Send flowers to the Wines family.