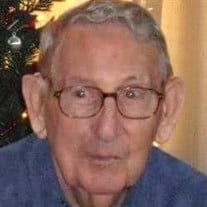 John Porter Siron, Jr., age 92, died Wednesday, August 12, 2015, at Colonial Place in Elkins. He was born on August 26, 1922, at Kanawha Head, WV, a son of the late John Porter and Pearl Douglas Siron. In January 1944, he was united in marriage to Ruby Jean Siron, who preceded him in death on July 31, 2015. In addition to his parents and wife, he was preceded in death by one son-in-law Philip K. Casto, Jr., one sister Emogene Cutright, and two brothers: Guy and James Siron. He is survived by two daughters: Shirley Casto and Judy M. Strader, both of Buckhannon; four grandchildren: Kimberly Price, Eric Rexroad, Shari Zalaznik, and K.C. Casto; nine great grandchildren; and two great-great grandchildren. Mr. Siron attended the Good Hope Tabernacle Church and was the former owner of Siron Trucking Company. The family will receive friends from 4-8:00 PM, on Friday, August 14, 2015, at the Heavner and Cutright Funeral Chapel. The funeral will be held at 10:00 AM, on Saturday, August 15, 2015, at the Good Hope Tabernacle Church, with Pastor Holly J. Hoover officiating. Interment will follow in the Buckhannon Memorial Park.

The family of John Porter Siron, Jr. created this Life Tributes page to make it easy to share your memories.

Send flowers to the Siron, family.