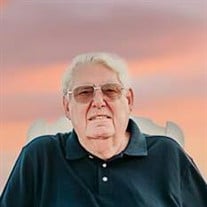 John V. McGrew, Jr, 80, of Buckhannon, went to be with his Lord and Savior on Sunday, January 27, 2019, at the United Hospital Center in Bridgeport. He was born September 15, 1938, in New Haven, WV, to the late John Sr. and Irene McGrew. In addition to his parents, he was also preceded in death by two sisters: Jane Lee and Ramona Nease. John is survived by his high school sweetheart and loving wife of 63 years, Janet A. McGrew; their six children: John “Kenny” (Retha) of Chesapeake, VA, Mike (Sheri) of Buckhannon, Joanna Mitchell (Kenny) of Huntington, Steve (Dianna) of Smithfield, VA, Scott (Melissa) of Midlothian, VA, and Jason (Mindi) of Hurricane, WV; fifteen grandchildren: Jessica, John Travis, Ashley, Chelsie, Tanner, Korey, Brianna, Stephen, Jordyn, Bailey, Brooklyn, John, Jack, Mitch, and Rhett; ten great grandchildren: Collin, Savannah, John “Luke”, Blake, Cole, Keegan, Aubree, Parker, Mason, and Fallon. John had been a resident of Upshur County since 1961, and retired from the West Virginia National Guard after 39 years of service, holding the rank of Lieutenant Colonel. He was the president of the Tennerton Public Service, a 40-year active member of the Tennerton United Methodist Church, and active in the local Lions Club. John spent his life loving and caring for his wife, children, grandchildren, and great grandchildren. He greeted each morning and family member with a smile as if it was his duty to make their day better. An avid sports fan, his talents were many, from carpentry, to auto mechanics, to gardening, to accounting, to his famous weekend breakfasts. Family and friends could always count on his dependability and expertise to fix almost anything. He loved his wife more than himself and taught his children to do the same. He always looked forward to the next chapter in life and never dwelled on what might have been. Sacrificing daily for his family, he was slow to anger, even in raising five imperfect sons and one daughter. He demanded accountability and respect for their behavior and treatment of others, all while maintaining a wonderful sense of humor. Always humble and full of faith, this “Gentle Giant” was a great family and community leader who will be greatly missed. The family will receive friends on Friday, February 1, 2019, from 4-7:00 PM, at the Heavner and Cutright Funeral Chapel. The funeral will be held on Saturday, February 2, 2019, at 11:00 AM, at the South Buckhannon Mission Church, with the Rev. Robert Anderson officiating. Interment will follow in the Heavner Cemetery, where the Upshur County Honor Guard will provide military honors.

John V. McGrew, Jr, 80, of Buckhannon, went to be with his Lord and Savior on Sunday, January 27, 2019, at the United Hospital Center in Bridgeport. He was born September 15, 1938, in New Haven, WV, to the late John Sr. and Irene McGrew. In... View Obituary & Service Information

The family of John Victor McGrew Jr. created this Life Tributes page to make it easy to share your memories.

Send flowers to the McGrew family.