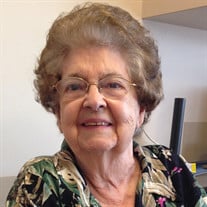 Jessie Virginia Potts Sanders Marsh, age 89, of Buckhannon, died Tuesday, February 7, 2017, in Uniontown, PA. She was born August 2, 1927, in Rock Cave, the daughter of the late Sanford Roy and Pearl Gertrude Eskew Potts. She was united in marriage on June 20, 1980, to Benzil R. Marsh, who preceded her in death. She was also preceded in death by her first husband, Hilton Henry Sanders. Surviving are three sons: John Richard Sanders and wife Ramona of Carmel, Indiana, Michael Lorentz Sanders and wife Sarah of Rock Cave, and Randall Hilton Sanders of Brownsville, PA; four grandchildren: Ashlyn Sanders LeBlanc and husband Christopher, Michelle Sanders Bailey and husband Michael, Tracey Sanders Corrigan and husband Eric, and Michalla Sanders Kriss and husband Jonathan; five great grandchildren: Brandon and Nathaniel Bailey and Abigail, Matthew, and Alex Corrigan; three step-grandchildren: Kathryn Jo Goff, Carl Goff III, and Angela Collins; and, five step-great grandchildren. Jessie was an accomplished seamstress, artist, writer, educator and entrepreneur who had been active in the world of pageantry, the WV Strawberry Festival, and the Frank B. Bartlett Post No. 7 American Legion Auxiliary. She loved nothing more than for her dining room to be filled with guests and she enjoyed a life that was filled with accomplishment, strength and an abundance of love. Friends will be received at the Heavner and Cutright Funeral Chapel on Friday, February 10, 2017, from 4:00-6:00 PM. Funeral services will be held on Saturday, February 11, 2017, at 11:00 AM at the funeral chapel with Rev. Robert F. Heavner officiating. Interment will follow in the Rock Cave Cemetery.

The family of Jessie Virginia Potts Sanders Marsh created this Life Tributes page to make it easy to share your memories.

Send flowers to the Marsh family.