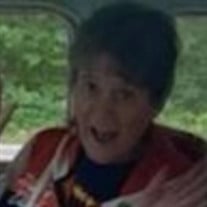 Jeanne Leah Long Powers Phillips, age 61, of Salem Ridge, the Gaines Community died on Saturday, October 2, 2021, at her home. She was born on August 9, 1960, in Buckhannon, a daughter of the late Kermit Dale Long and Elwanda Jean Haddix Long who survives. In addition to her daddy, she was also preceded in death by one brother, Keith Long; a nephew, Kermit Dale Long III; two stepchildren: Daniel and Tonya Phillips. In 1982, she married “Tink” Verl Gene Powers for ten years and had two children. She is survived by one son Dale Gene Powers and wife Erica and one daughter Jenna Dawn Phillips; one beautiful granddaughter, Journey LeDawn Phillips (her little nurse Angel) and two step grandchildren; Brooklyn and Drake Bryant. In 1994, she was remarried to Bernard “Bernie” Phillips for almost twenty years. Also surviving are three brothers, (older twin brothers) John and Dave and (11 months younger) Kermit Long; nephew, Michael Long (Jess) and two nieces, Maysie and Adilynn. Jeanne had an abundance of other family members and so many friends surviving. (Too many to name). Jeanne was a graduate of Buckhannon-Upshur High School in 1978. She worked at Moore Business Forms for sixteen years (as a Press Operator, Press Tender, and Relief Tender before receiving a position as a Purchasing Coordinator), after the unfortunate closing of Moore, she then went to work for J.F. Allen Company for many years as a Paving Administrator before accepting a position with WVDOH District 7 Headquarters in Weston in 2014. She worked hard to improve her education and attended college courses and on-line classes to train and increase her knowledge. She loved the outdoors. Riding motorcycles, ATVs, Side-by-sides and playin’ in the mud. She loved to “stomp” dance in her cowboy “cowgirl” boots and was well known for wearing the soles off her boots. Beer was her “drink of choice”. During her lifetime, she participated in many community activities. Her role in organizing the local Christmas programs at her church and arranging hayrides and caroling for the kids in the community. She served as a Trustee of the Salem United Methodist Cemetery on Salem Ridge after the passing of her Uncle Andrew Dixon Long “Uncle Dick”. Her friendly smile, quick wit and sense of humor will be missed by all that knew her. A special thank you to her Aunt Caroline Long and best friend, Robin Wilson for being there thru the duration of her illness battling with cancer. The family has honored her wishes for cremation and a memorial service will be held at a later date, at which time a memorial will be erected at the end of her driveway in her memory.

Jeanne Leah Long Powers Phillips, age 61, of Salem Ridge, the Gaines Community died on Saturday, October 2, 2021, at her home. She was born on August 9, 1960, in Buckhannon, a daughter of the late Kermit Dale Long and Elwanda Jean Haddix Long... View Obituary & Service Information

The family of Jeanne Leah Long Powers Phillips created this Life Tributes page to make it easy to share your memories.

Send flowers to the Phillips family.