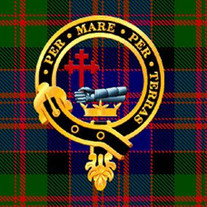 James Alexander (Jim) McDonald of Savannah, GA died on 5 July 2019 at home after an extended illness. Born on September 3, 1931 in Atlanta, Georgia, Jim was the great great-great-grandson of Alexander MacDonald of Glenelg, Lochalsh, Scotland, himself a Private (1776-1783) in His Majesty’s 42nd Regiment of Foote, the renowned Black Watch. In 1783, Alexander received a land grant in New Brunswick, Canada and fathered 12 children, who gave him 104 grandchildren. Jim was the son of Kenneth George McDonald and the former Katherine Greene. Jim graduated from Decatur Boys High in 1948 and in 1949 entered the Forestry School of the University of Georgia. In the spring of 1952 he was drafted into the U.S. Army and served as a management forester in the Third Army at Ft. Jackson, South Carolina. Following military service, he returned to UGA and in 1955 completed his forestry degree. Jim worked for four years as a Wood Procurement Forester with St. Mary’s Kraft and operated his own logging business. In 1960 he joined Atlantic Creosoting Co. of Savannah as Head of Forestry and Land Management. From 1984 until retiring in 1994, he focused on developing Atlantic Creosoting Co.’s coastal land holdings into residential golf communities. Devoted to family history, Jim joined Clan Donald USA in 1971 at the Grandfather Mountain Highland Games in North Carolina. He served Clan Donald USA, an organization of over 2,000 families who trace their ancestry to the branches of Scottish Clan Domhnaill, in many positions including Southeast Commissioner, National Convener, National Historian, and National Genealogist. He was a member of the Clan Donald Foundation Board and, in Scotland, the Clan Donald Lands Trust and the Finlaggan Council. Jim and Hester were life members of Clan Donald. In addition, Jim was a member of Theta Chi Fraternity, the Saint Andrew’s Society of the City of Savannah, the Episcopal Church, and many historical and genealogical societies. He was a charter member and past president of the Coastal Scottish Heritage Society and of the Savannah Scottish Games, and a founding member of Post 7, Scottish American Military Society. Jim was an active member and supporter of the Garrison at Fort King George in Darien, GA. Jim was predeceased by his parents. He was married for more than 50 years to the former Hester Reed of French Creek, West Virginia, who survives him in Savannah, as do a daughter, Constance Lynn Ashley and a grandson, Brooks Alexander Quann. Arrangements handled by Baker McCullough Funeral Home, 7415 Hodgson Memorial Drive, Savannah. A Memorial Service will be held at the funeral home on Saturday, 10 August 2019 at 2:00pm with visitation beginning one hour prior. Private interment in French Creek at a later date. Remembrances may be made to: Clan Donald Foundation, Inc., 29 Ashville Place, Newnan, GA 30254. Designate: Clan Donald Lands Trust. Arrangements in West Virginia are under the direction of the Heavner and Cutright Funeral Chapel.

The family of James Alexander (Jim) McDonald created this Life Tributes page to make it easy to share your memories.

Send flowers to the McDonald family.